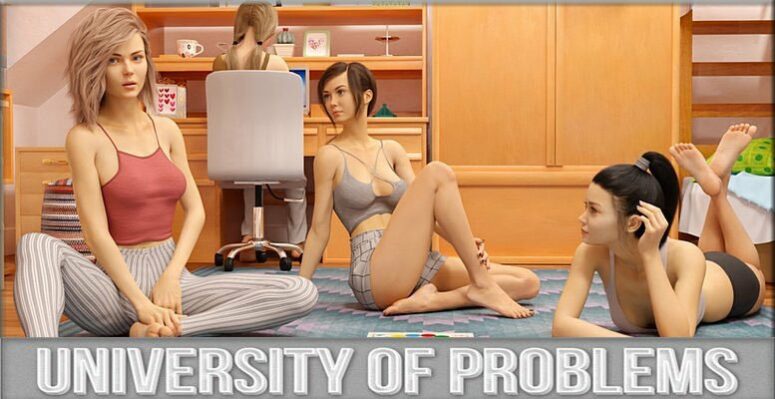 Student life is perhaps the most vivid, colorful, and memorable period of life for many of us. You start your adult life, feel unlimited possibilities, make a lot of new acquaintances. “University of Problems” is just about it.

An ordinary guy from an ordinary family unexpectedly enters one of the best universities in the country. What could be better, right? Lots of opportunities, constant parties, attractive girls, complete freedom of choice. In a word: real adult life…

3) New in-game phone app – PVU Cheats (Only for Extended version for now. Most likely I’ll solve this issue in v0.7.0)

changing the MC’s characteristics
changing relationships with the main girls
unlocking all memories, all extra content and all phone’s backgrounds

Cheats are disabled by default, so if you don’t want to use this feature, then no one will force you to do it. You can also disable it at any time. It’s your choice.
However, if you change your mind in the future, you will be able to access the blocked content and get the missing points of lust, intelligence and so on at any time in a couple of seconds!
Minor:

v0.6.0 Basic
Important notes:
1) Replay last studio Nikki event if you don’t wanna help her in future
2) If you didn’t get new events with Ashley, then replay events with her started from v0.5.5. If that can’t help, replay started from v0.5.0
Changelog:
Main:
1) Renders:
~660 renders and 5 animations ( +100 renders, 3 animations and 6 PVU Lewd photos in the Extended version)

~690 renders and 5 animations ( +85 renders, 3 animations and 6 PVU Lewd photos in the Extended version)

Some work on the UI of the MC’s diary/notebook
The pop-up system has been redesigned
Added emojis to PVU Pics and PVU Chat apps
Reduced requirements for intelligence, strength, and lust points in the some events from v0.3.5

v0.3.5 Fixed
1) fixed an important bug when the player chose the option to “Postpone” a date with Carol, but the date still took place (this problem occurs if you agreed to help Ashley) If you encounter such a problem, then REPLAY the game from the scene with the arrival of Carol again, so that in future updates you’ll not have other bugs related to this
2) fixed a bug with Roxy’s reply in the PVU Pics app
3) added a couple of missing images in University of Problems
4) optimized the pop-up notification system (some players complained about game crashes when notify icons showed)
5) added an official translation into Portuguese (thanks to Ryu-oh)

3) One new characters are fully developed:

4) Added the ability to change the background of the in-game phone (This is the first part of the phone customization mechanics.)

5) Redesigned the memories tab: all scenes are divided by characters, the design is changed.

Fixed a few minor bugs related to the in-game phone.

Minor:
Notebook (diary) slightly redesigned (added ‘Extra’ tab for extended version).
PVU News slightly redesigned in University of Problems.
Added the possibility of alternative development of relations with Carol (dialogue after cafe). Now you can invite her to your room (just like in the v0.2.0), or you can take your time (the relationship with Carol will develop more slowly, but as in this case you will miss a lot of interesting moments with Carol).
The PVU Chat interface has been slightly redesigned. Now you have a button that scrolls the screen down to the last message
The PVU Pics interface has been slightly redesigned. Now you have a buttons that help to scrolls the screen down and up
Reduced intelligence requirements for the first events with Rachel

440+ new images
8 new events + one big party
16 new music tracks
Redesigned PVU Pics app
Love points are introduced. A system of relationship points and love points is now available. (at the moment you can get one love point for Carol)
Images and audio were compressed 1.4GB to ~ 600 MB (images are compressed without loss in quality, there may be issues with audio)

Serious relationship development with Carol and Rachel
Revealing the life problems of Rachel, Carol, Sara and Ashley
Added 5 new minor characters
Added the ability to avoid a scene with Roxy in the shower (this will not affect the development of relations with her)
Added a warning system before important story forks
Slightly changed the phone’s user interface
Fixed bugs and errors found in the previous version
Little preparation has been made for adding free roam in the next update