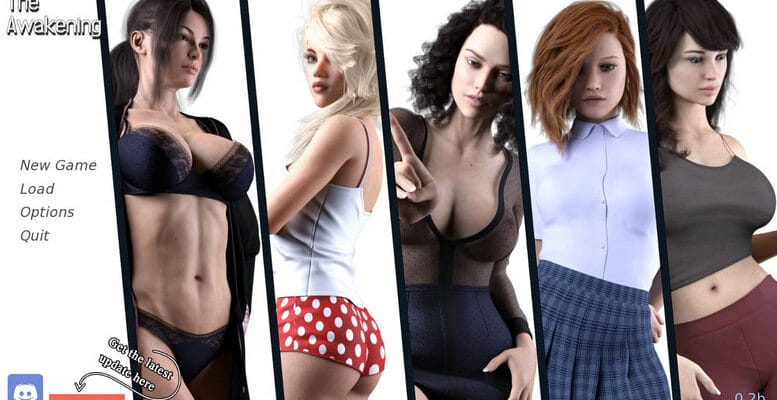 After two years you finally wake up from a coma which was caused by a car accident. You are suffering from amnesia and you have not the slightest idea in what kind of situation you are in. CREATE your character and go along the journey to find out who you truely are. Don’t forget that your choices will make an impact on the story as new updates come out…

+ Changelogs
v0.4.1 (Beta Update Part 1)
So this is the first part of the rework. Some parts are still rough and need some work, but overall this is the general direction it will take.
We are taking more time refining the story. Putting more love in the detail. And making sure that the overall theme stays true to itself.

With the reworked beginning we are trying to tie the story better together with additional new features that we will introduce in the 2nd part later on.

The second part of the beta is about 50% done I’d say, so that will come out soon.

v0.4.0
Here’s what’s new:
New Story lines for the teacher Klara, and the Landlady + some side scenes with other characters within those stories.

There’s around 1000 new renders with 200 xrays and 36 animated scenes.
I also changed it when you load an old broken save it will put you into free-roam instead of crashing.
(unless you try to load a save where an idle animation is playing, I didn’t manage to fix that yet)
There’s still a new fairy scene missing, but I just couldn’t get it done in time, but it will be shipped when I completed it.
If you have the launcher from 0.3.5b still installed and you want to update the game through the launcher -> Start the launcher -> Click Update -> close the launcher -> reopen the launcher -> click update -> Play

v0.3.5
A continuation to Margaret’s Story.

v0.3.2
-A new story path for the Landlady
27 idle animations
213 still images
7 animated sexy scenes in The Awakening
Voice lines for 0.3.1 have been added
There are some new gameplay mechanics I hope you’ll like.

v0.3.1a
here’s 0.3.1a Linda update
58 idle videos, 9 animated scenes, 70 still images.
it’s a very alpha build, so text hasn’t been edited and voice over will be added in november.
anyway, hope you still have fun with it, compressed version will be made when I have the edited texts, or someone else makes one

v0.3c
Brings voice over for the characters.

v0.3
+added an inbuilt guide that you can use if you get stuck
+added additional night visit scenes
+added a new place to visit.
+added Margaret’s first story part
+added new roommate story part
+added the beach episode as a daydreaming option
+added new fairy content in The Awakening
+the code for the free-roaming segment has been completely rewritten and should give better performance, especially on phones. (a bit of lag when visiting a room for the first time)
+ color correction and noise reduction has been done for the 0.1 part -> let me know if you like it.
+ every text/dialogue has been edited to be less cringe to read (huge thanks to Conviction07!)
+voice over will become available as soon as it’s ready! (please let me know if you find any typos or stuff that doesn’t make sense before I send it in )
Ps: if you find some typos pls let me know so I can correct them. The dialogue for the roommate part has not been edited yet -> so that’s my own written text you have to read, unfortunately
Pps: In the options you can select “Deutsch” as a language. I wanted to translate the game myself into german before 0.3 but I couldn’t make it. But I’ll add it with the voice-over update

+ Developer Notes
The Awakening Developer Notes
PC Pass: greedisgood
When using an old save file, make sure to use one where you are in the free-roaming part, since they seem to work more likely!