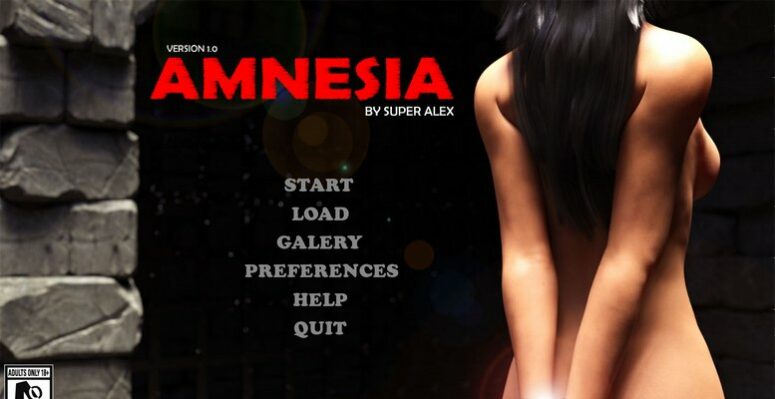 Amnesia is a new story from the developer of the popular game Lucky Mark. A man wakes up from a coma with amnesia. Can he recover his memories and reconnect with his loved ones?​

v0.88c
Fixed a critical bug, when talking to Amelia or Fabio, there should be a stalemate, because these scenes are not ready yet. If you passed the scene with Amelia and Fabio, you need to load the game before the dialogue with them (to see the new scenes in the next updates)

v0.85a
+Added Social Network (FotoTube)
+In the fourth scene with Rei. Now the sound of the car is turned off when the MC gets out of the car.
+Added translation to German language up to v0.82
+Added Russian translation up to v0.8
Story Scenes: 5
Free Roam scenes: 0
New Images: 162
New Animations: 2

v0.82a
+Added a test with Kate
+Added a scene with Elena in the shower
+Instagram scene added (according to the plot – this opens access to Instagram, but I will try to implement the ability to use Instagram by the next update)
+Updated Free Roam scene with Alexandra in the bathroom (Wednesday night)
+Added translation into German up to and including version 0.8
+Minor translation bugs fixed

+Now, after event with the board and Kate, all items from the inventory for this event are removed
+A scene with Rei has been added to the gallery (it is enough to go through this one scene so that the gallery opened in all saves)
+Now, after the dialogue with Elena about the laptop, time is move forward
+Updated Credits

v0.8c:
1. Fixed a critical bug that did not allow you to finish the task with the search for items for the board
2. Fixed a bug in a first scene with Kate when choice “I want to make money to help Alexandra”
3. Added notifications and sounds to the event with the search for items for the board
4. Added task completion labels (for the current version) for all tasks
5. Added progress in the task “Find out what happened to me” (for the correct passage of the game in future versions, I recommend replaying the scene with Kate, where they make a board)
Fixed minor bugs with incorrect transitions at Free Roam

v0.8a:
This is the first version of the game with full Free Roam
Most of the code has been reworked and adapted for Free Roam
1.Added a night period
2.Added a money’s line in the inventory
+Updated the map for each time of day
Possibility of full translation (SMS, Tasks, Notifications, Tooltips, etc.)
3.Added the locations of the Hero’s House, Hospital and Shopping Center
4.Added the ability to re-watch scenes from TV and some future special scenes via a laptop in the MC’s room
5.Added all hidden images of special renderers to Free Roam. Now if you didn’t find any images in the introductory part – you can do it in FreeRoam
6.Added some new special renderers
7.Added the ability to use the found panties before sleep
Story Scenes: 22
Free Roam scenes: 23
New Images: 650
New Animations: 70

Fixed major bug. Day 2 Morning. You can complite “Placate my belly” even if you try to enter the Elena’s room the several times.

v0.3a
1. Added scene’s gallery
2. Added special renders gallery
3. Added achievement system
4. Added Event tracking diary and history with each character
5. Added GUI in AMNESIA
All variables have been completely redesigned and many new ones have been added

v0.2b:
Music does not restart when you navigating in the menu
Sound in animations is tied to the effect slider now and can be adjusted
Fixed a bug with creating a screenshot in AMNESIA

Added German and Russian languages
Minor cosmetic changes.
Added the option not to touch Eva in the Hero’s bedroom.
Replaced two animations with Eva in the hero’s room at 30 frames per second.
The size is reduced by half, but it seems to have affected the quality of the images (v0.2 I did not risk to compress)
Added new variables witch will remember the player’s actions in order to change the reaction of the characters in future versions, as well as this will affect the gameplay in general (it will allow you to make several branches of behavior with some characters).
Added ability to change the transparency of a textbox in the settings.
IMPORTANT POINT – old saves will not work. You have to play the game from the beginning!