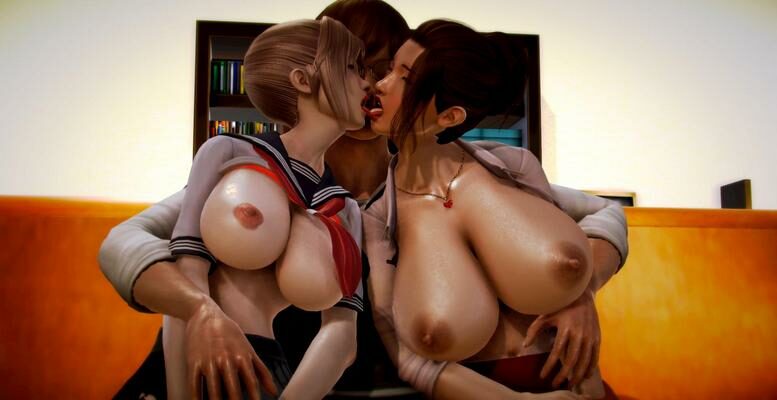 You like corruption topics? The girls in the game are becoming increasingly depraved and enslaved. You can see different events for each corruption level…

+ Changelogs
Final
– Jenny and Nicole Ending In the living room (added animation)
– Main story Ending in Sanctuary
– Ending of Auntie’s family at Julia’s house
– Ending at the main entrance of the apartment building
– Megan and Emily Ending in their house (added animation)
– School ending at the main hall
– Tutor house Ending
– correction of awkward scripts
– Many bug fixed
There are still some unfinished tasks. (Gallery, Additional Endings of Some Characters)

Each scene is very short, and thus is a standard update for Mr.C. Not large but enough to string along his patrons.
Total CG added: 144

v1.40:
Mrs.Robinson’s new scene
Sophia’s new scene
Coffee shop maid 2 new scenes
and the Casino girls but it’s bugged for me so I don’t know how many scenes you get maybe 3 or 4 levels of corruption for the dealer and the three rich women that’s it.

+ Cheat Mod by D.S.-sama
Now you’ll have a image button (my logo) in the up-right corner of the screen that you can press or if you’d like you can press ‘z’ and the mod will appear. In the living room and town map the screens will not appear but if you press ‘z’ the mod will appear. Now you also have the option to use some cheats without needing to enter the cheat menu, right from the ui screen.

Installation:
1. to install mod you must unRAR/unZIP the archive “D.S.Mod” in the “…\corruption” folder
2. for uninstalling the mod you only have to delete the .rpa file, but if you used UnRen, then you must also delete the folder “…corruption\game\D.S.Mod”

+ Console cheats codes
to open the Console press Shift+O then type the command and press Enter.
To get the console if you don’t have it I recommend using UnRen because it’s easy to use and it offers more options.

change the “x” with the number you want
money = x
day = x (by adding or removing days you change the days of the week, for example if you want to always have “Monday” and you have lets say 421 days and you are at “Night” set the day to 420 and do what ever you like to pass the night and in the morning you’ll be at day 421 on Monday morning)
time = x
were x is :
1 for “Morning”
2 for “Afternoon”
3 for “Evening”
4 for “Night”

Installation:
Two ways
One is to put script.rpy into corruption/game

If first doesn’t work try this
Extract corr.rar file and put it in corruption/game

How to use it:
You have nothing to do everything will be automatically done expect
If you want to use save file then load the save file go to computer , click on bonus and enter 1546 you will get 3000 Money.

+ Internet Mod:
Replace the comp.rpyc file in the game directory.
You can access the cheat menu via the computer in your room, just click the “bonus folder” icon in the top-left corner.
You can cheat money, potions, change your name and edit stats of all characters, including the bar hostess and Alice (the store girl). The sex values are set so you can view the transition scenes easily, for instance, if you set a character to level 2 and give them a potion, you’ll see the transition scene 2->3 unless it isn’t implemented yet.

The script is designed to work in future versions as well, just make a backup copy of the original “com.rpyc” in case it doesn’t.