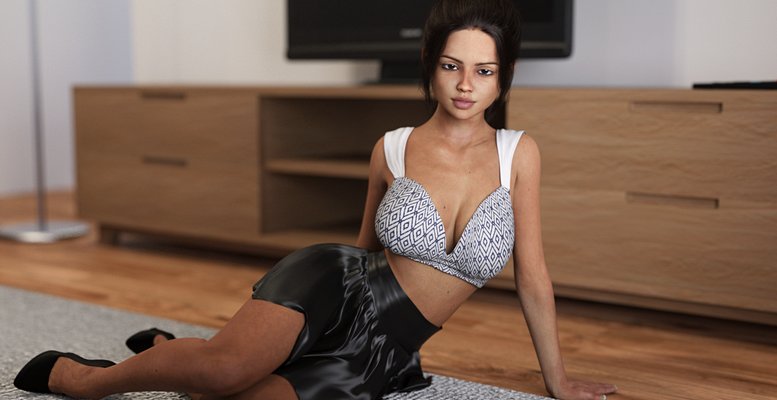 You will be playing as a guy, who’s never really clicked with girls too much. You’d much rather spend your time on the computer than dealing with real-life relationships. However, It’ll all quickly start to change shortly after diving into the story. Your best friend, Joe, has made a significant change in his life, and he is there to pull you out of your comfort zone into a new lifestyle. Vanessa, Joe’s girlfriend, and Ann, her shy friend, are just two of the girls you’ll encounter early on in the story. Are you going to build a relationship with sweet, shy, Ann? Maybe you’d corrupt her instead? Heck, why not try to steal Vanessa away from Joe?

+ Changelogs
v0.7a1
This version of the game is very animated with 25 new animations. We strongly suggest a fresh start so you can experience them! Most animations are in the older scenes!
Follow Ann’s dream of becoming an actress. How hard does she want it?
A new relationship between MC and Jenny is forming.

New Big Features:
– Choices screens!
There is now a total of 17 different screens for the game’s most loved characters! See if you can find them all! (Hint: screens per version – V0.1 – 3, V0.2 – 2, V0.3+0.4 – 4, V0.5 – 3, V0.6 – 5)
– Rewatch Scenes!
A new gallery with recordings of your seen lewd scenes. Different outcomes get different recordings!
– Persistent Messaging App! [NEW since Beta] A new more interactable messaging app with better UI, chat history that can be viewed at any time, better picture support, and even unique typing speed per character!
– Insta (both PC & Mobile) now supports albums!

General:
– A new console can be accessed using the Tilde(~) key. You don’t need to touch it, but it offers some powerful tools. Most noticeably – show FPS or modify variables in-game. NOTE: Modifying variables might lead to unexpected results in the save file.
– Proofreading for V0.1-V0.25 content! Thank you Art for the help!
– Remade skip mode, it is now even more stable and feels great to use. (Hold CTRL to skip, Press S to toggle skip). [NEW since Beta] – Added filters in load screen to Android as well.
– Dialogue history panel now draggable and generally better (smoother, and more responsive auto-scroll). Note that this panel will eventually be replaced with the new rollback feature!
– Game menu adjusted to properly handle unusual resolutions. should be a better experience on android.

FIXED ISSUES:
– Multiple story issues such as continuity issues, typos, and unreachable scenes were fixed.
– Fixed a commonly reported issue of a looping story after getting to bed with Ann.
– Clicking save button in menu while already opened keeps it opened instead of closing it.
– Quality issue when moving to full screen. You can get around this issue by changing the resolution in the settings after going full screen to another resolution and then back to the desired one.
– Multiple rendering issues fixed for users with screen aspect ratios different than 16:9.

Changes (from previous v0.6BETA build):
– [ADDED] A new console can be accessed using the Tilde(~) key. You don’t need to touch it, but it offers some powerful tools. Most noticeably – show FPS or modify variables in game. NOTE: Modifying variables might lead to unexpected results in the save file.
– [ADDED] Two choices screens for Ann for V0.6 content.
– [FIXED] Choices screens will come after pressing a button, and not jump in right away.
– [FIXED] Quality issue when moving to full screen. You can get around this issue by changing the resolution in the settings after going full screen to another resolution and then back to the desired one.
– [FIXED] In the choices screen with the picture of Vanessa in bed – text color is hard to read.
– [FIXED] In V0.1, when Joe hands MC the phone, an image of Vanessa is flickering.
– [FIXED] In the new Vanessa bedroom scene, Ann will sometimes pull a magic trick and change clothes in the middle of a conversation.
– [FIXED] Choices screen in V0.2 got skipped if MC went to sleep naked.
– [FIXED] Choices screen in V0.2 for Ann was a black screen in some conditions.
– [FIXED] Clicking save button in menu while already opened keeps it opened instead of closing it.
Changes:
Story
– New “Underpass” Scene – Can only happen on Ann’s corruption route + Joe not rival.
– New Ann’s Love Route Scenes – (When not corrupted) Ann will show up at the MC’s place instead of Vanessa. Also added a small scene at the library (one for each NTR and no NTR paths).
– New Ann’s POV Scene – Describing the sexual scene in Chris’s car (Ann hate route).
– Vanessa will now go shopping with the MC on all routes. However, the dialogue has been adjusted to fit the player’s storyline.
– Joe will not be at Vanessa’s house on his rival path.
– Added 10 new Insta photos for Alex. Note: post stories and comments are still missing.
Changes to older version story content
– Fixed a bug where Emily and the MC kept talking about the same things at night in the living room (If you went with her to the beach).
– Chris will be in the library with Ann only if you allowed him to take Ann’s number + told Ann she can keep texting with him.
Game
– Proofreading by Art for V2.5. Thanks Art!
– New choices screens! Some easter egg ones included as well!
New framework changes:
– Insta (both PC & Mobile) now supports albums! An album indicator will appear on the image on the main page. Navigation indicators will appear on the image on the post page.
– Some UI improvements to mobile insta.
– Added new features mostly aimed at ease of use for modding. Modding oriented info will be covered separately.
FIXED 0.6a2 ISSUES:
– Fixed an issue causing the last choices screen to not be shown in some scenarios.
– Choices screen for version V0.3 and V0.4 have been merged (and moved to V0.4 ending). The time between V0.2 and V0.3 ending was too short causing the screens to appear too often.
– Fixed a bug where the recorded scene of Vanessa and Joe (After truth or dare) Didn’t stop at the correct place
– Fixed issues where wrong information was displayed in some choices screens.

V0.6a1
Story
With around 180 new renders, this alpha is focused on the continuation of Ann’s love-corruption route! This alpha also contains most of the cross-path shared content in version V0.6.

Framework – Just highlights. Big changes here, read about it in details in the development update post.
– Added a new feature, Choices Meter screen. It lets you compare your choices with other players! You can opt-out and completely disable network connectivity in settings if you don’t want it. We don’t keep any logs.
– Added a new feature, rewatch scenes! Your unlocked scenes will be recorded, you can rewatch them in the main menu. You can also see hints on how to unlock scenes there!
– Advanced modding and patching features. Plus, new settings for modding, support for images, and more.
– Huge optimization update! loading times reduced fro ~10 seconds to less than a second!

General
– Proofreading for v0.1 – Thank you Art!
– You can skip unseen content (activate in settings). You can also Hold CTRL to skip (in addition to normal S to skip toggle).
– Submit input fields with the Enter key.
– The game should now be locked to 60 FPS to all players.

v0.4.1
Story
– Fixed a bug where parts of a dialogue with Chris(near the end of the game) on Vanessa’s blackmail + Ann love route were missing
General
– Windows\Linux will no longer keep saves in the game folder, so you will no longer need to copy your Saves directory between releases.
There is now an automatic check that will move those saves to the new location for you when opening the game.
Copy your Saves folder to the game folder(same as before) and open the game. This time the game will show a quick message saying the files are being moved and your saves will be transferred to the new location.
Note! This is a move operation, not a copy. While nothing should go wrong, you might want to backup your saves folder (just in case).
The new Saves location is in the appdata folder.
TL;DR – Copy your Saves folder to the game folder. Open the game. Saves will be moved to the new location.
– Save pages should now work as intended
– The Mac build now works properly.
– Disabled a swipe gesture to open menu on Android since it interrupted with game-play. Use Back button instead to open the menu.
– Fixed a bug where some saves on Insta would not load properly as well as some scenes from the Truth or Dare game.
– Fixed a minor issue where Credits sometimes skipped the first credit page and caused a delay.

v0.4
The story continues! At the start of V0.4, you will go to the bar to celebrate Joe’s birthday.
If you aren’t on best terms with him you will still be there but under different circumstances 😉
The bar scene includes 4 different branches so make sure to check them all!
Then you will unlock 2 different scenes for Vanessa and\or Ann each.
Important notice:
If you are on the hate route with Ann (you told her you don’t like her when she came over) the version will end after the bar event.
But don’t worry! That route will get more content in the next version.
Overall, this version has 3 times the renders and 3 times the story than in previous versions. I hope you guys like it!

v0.2.5
LSS 0.2.5 is not as linear as 0.2, it has better replay value. Its overall length is the same as 0.2 and it has more renders!
Story
Truth or Dare? Our MC and his friends dive into a very daring game of truth or dare…
Framework \ General
– Ann & Vanessa menu themes added – Check out the theme option in settings if you feel like spicing up your menu 🙂
– Added game name to saves – This resolves an issue caused by placing multiple of our games in the same folder and sharing a Saves folder for different games.
For now, we still show saves with no game name (so you get to keep your old saves). Once we can safely assume most or all saves have been converted, we will only display saves for the relevant game.
This issue arises only when you place multiple games in the same folder. We still recommend avoiding it if possible.
To make sure your save was converted to include game name, simply load it and override it by saving again.

v0.2
The story continues! Added routes for both Vanessa and Ann. Joe’s got a nice surprise! Some Insta girl gets oddly popular.