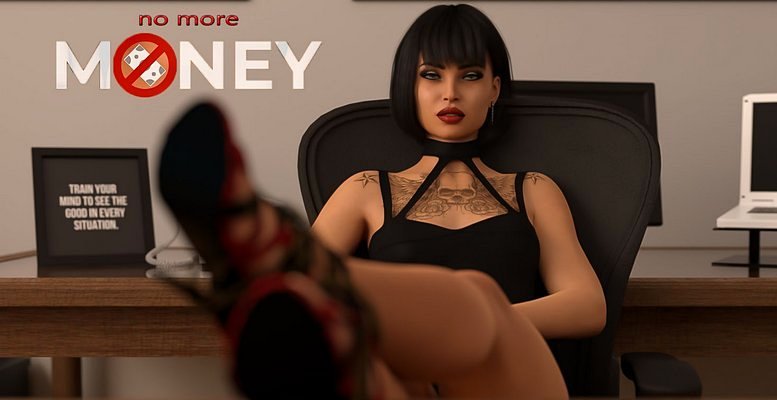 Everything started when my dad lost his company and everybody is forced to move in a different city. Here we have to start from zero in a small apartment with only two bedrooms, so “unfortunately” you’ll have to share a room with your younger sister. Since you’re already 20 years old, it’s time for you to help the family however you can, so you’ll be searching for a job.​..

+ Developer Notes
No More Money is a visual novel game with a lot of choices and consequences.

Season 2 Episode 7 – 2.7.2
Fixed a few typos and graphical errors. Nothing too important.

v2.6.2
Before moving to the actual content of the game, I want to let you know that from now on, the old Gallery is named Achievements and there is also another tab called Memories. Here you can replay the most important scenes from each episode, if you have unlocked them. You can unlock memories by reaching them in the gameplay, however for old players the game will automatically unlock the right memories you have already seen.

This episode starts with our main character planning a date with Lisa or Lauren, based on the choices you made in the previous episode. There are two different outcomes based on your relationship with the girl.

After you finish your date if you didn’t broke up with Emma, then she’s going to need to talk to you about something very important.

But as soon as you get home, Charlotte and Tris are waiting for you in the tub. They would love to spend some time with you and who knows maybe even play a little game.

However the game is Tris’ idea, because Charlotte had something else planned for today.

Once you’re done with her, you should go take a shower and get ready for a date with Tris, because you promised her to help her with her alcohol tolerance.

Now that the night has come it’s time for you to go out and have a little bit of fun.

That being said, this game is a choice based game and some of you might have a different gameplay, but these are all the available in this episode.

v2.5.1 Season 2 EP 5 GOLD
Fixed a bug that won’t let you close Beatrice’s path or Lisa/Lauren’s side path. If you want to close it make sure you replay the last update again. I’m sorry for the inconveniences.

About Season 2 Episode 5
In the beginning of the episode we have a very drunk Tris who had one too many drinks and feels like talking.

But the night is still young and a lot could happen.

However when the morning comes you have some talking to do about what happened last night. You can’t just do things at night and then forget about them.

Also for those who missed spending time with Lisa and Lauren, well I have great news, especially if you want to spend time with both of them. So if you didn’t know which one to choose and you tried to keep one on the side, well you’ll finally make some progress there.

But like I was telling you, this episode is mainly about Tris, that’s why for the rest of the day you’ll be spending time with her.

ABOUT SEASON 2 EPISODE 1 GOLD EDITION [v0.7.0]
We continue the story, but 7 weeks later. In this episode the wheels of the main story are finally turning, but also made some progress in some relationships.

This update might be one of the biggest one so I hope you enjoy.

Fix for those of you who wanted to be faithful to Emma, but you were kinda forced to cheat on her.
recommend playing the club scene again.

Ep. 4 v0.4.1
– fixed the mc name where it was hardcoded
– changed the date for episode 5 to June instead of July

Ep. 3 v0.3.2
– there was a big bug on the club side of the game, no matter what girl you wanted you only ended up with Lauren. If you’re on the club path please replay episode 3, otherwise the game will break in the future. I apologize for this.
– Added Mini games.

Ep.3 v0.3.1
Beside the new content I also added a few new features to the game to make it nicer.

There is a gallery with hot images of the girls based on your choices.
For those who will play on older saves, as soon as you start episode 3 you’ll unlock all the images of the previous two episodes.
I have added a progress bar below so you can see how much content is left.
You can disable this bar in the options tab
Changed the way our MC gets his messages on the phone. I created a custom screen where you can read the text better and access the images you receive.
The +20$ patrons will the Gold Edition version of the game with the walkthrough integrated already.
If you want to play the game without seeing the consequences of your choices you can disable them in the option tab
Fixed some small bugs and changed the text here and there.

Ep. 2 v0.2.0
The amount of gameplay in this episode is around one hour, but given the fact that you get to choose one of two jobs, playing one side of the Episode should take around 45 minutes.

Ep. 1 v0.1.1
– Fixed the images that had that raised the “FAILED TO DECODE WEBP” error
– Katrina will call the mc by it’s name instead of Toby.