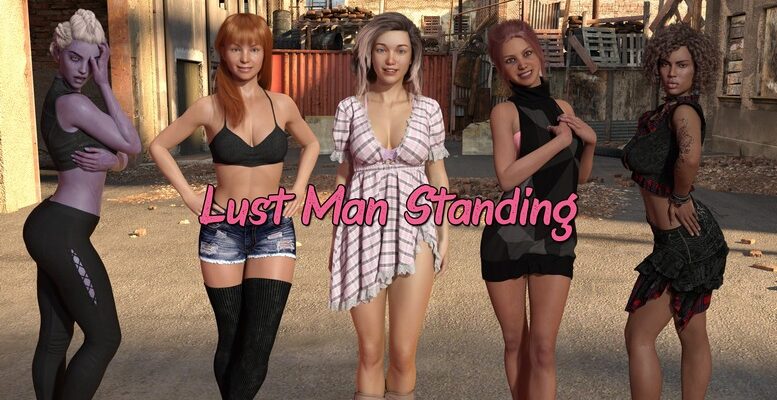 The game takes place in a world where you are the last man alive. The city is filled with beautiful girls that has their own distinct storyline. You are free to explore different locations in the city and pursue whichever girls you find attractive. Each girl is crafted with care to make them beautiful, and yet realistic. They also have their own personality and character arc. You will need to carefully choose your decisions on your quest of lust, survival and maybe even love.​..

+ Changelogs
v1.2 FAP Edition
Finally got it done! I hope you’ll like the new outfit and the new room. I try to make each night outfit a little different for each character. The only problem is that all the outfits take a lot of space and the game size is starting to get huge. There’s no way for me to compress it without losing quality. This might be a problem once I start to add more characters.
There are a total of four outfits for each character. Here are the steps to unlock the new outfits:

In the main game, find shopping bags by exploring different locations
Once you have collected the new outfits, save your game
Load that save inside the FAP Edition
Once the save is loaded, press ESC and click on “Main Menu”
Click on the mannequin and you’ll see the new outfits

v0.5.0.3
I’ve improved the HUD, added animations and sound to new icons. Now the stamina bar will change colour based on your energy level
I’ve improved Kaylie’s idle animations. It should look much better now
Added idle animation for Zora
Fixed all known bugs
Some of you probably don’t know this, but if you hover an item over something that can be interacted, the item will glow and pulse. I’ve increased the area and speed of the pulse animation. Now it should be more readable for people who are colorblind

v0.4.1
Around 9 animations, 300 new renders. A lot of new dialogue and events with Kaylie and Roommate.
Added: all the new contents that are listed in the achievement menu
Added: new improved fonts for characters and menus
Added: ability to control animation speed
Changed: significantly increased the rates of random character events
Changed: inventory items will now glow yellow before you use them
Fixed: all known bugs have been fixed from previous versions

v0.4.0.2
No new contents!
Just updated the UI to make it look better. Inventory items now glow when selected.
Also added buttons to control animation speed when you use the flashlight on Kaylie.
I’ve also hidden some new pictures in the files. The pictures are a bit compressed so they won’t look the best, but might be worth your time to dig a little haha
Oh and no more grinding

v0.2.4.1
Fixed the bug where if you get caught sneaking into your roommate’s bedroom at night, you can no longer attempts to sneak into the room the following nights.

v0.2.4
Spent a lot of effort this time to make the game run smoother and load faster. In addition to the new contents, there’s also an achievement feature that gives you hints and directions for each update. You will also be able to unlock new rewards by completing these achievements.
Please start a NEW GAME. You’ll miss out on a lot of contents if you use an older save. But don’t worry, you will be able to use your existing saves for all future updates, I promise!

+ What is the FAP Edition?
I organized all the sex scenes into an easy to navigate scene gallery.
You’ll be able to replay all the sexy scenes with each characters as many times as you’d like.
Since this is a separate edition and I’m not restrained by file size, I added multiple outfits that can be unlocked for each character.
All you need to do is load your save into the FAP edition and you will be able to dress each character as you’d like and view them from all angles.
You’ll have the ability to rotate the camera 360 degrees and I think it’s pretty cool.
With the FAP edition, I’ll be able to do more experimental stuff, things that wouldn’t fit in the main game.