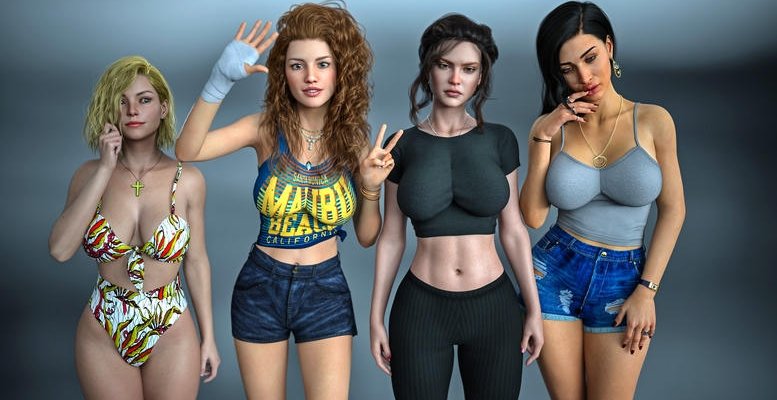 In Nursing Back to Pleasure game, you are a young man that works as a physical therapist and you are called to a house job by a rich and somewhat strange man, who turns out to be the leader of a mysterious cult. His daughter, Charlotte was involved in an accident months ago and still hasn’t fully recovered. Fearing she will develop chronic pain and wanting to compensate for his lack of presence in the girls life, the man is more than willing to spend large amounts of money to make it up to her. Here you meet the sweet Charlotte, her cute and funny friend Lisa, the cold and distant step sister Hazel and the cheating temptress Nicole, the step mother.
Upon arriving at the house, you soon come to realize that lust and temptation lies at every corner. The girls all look incredible and you find it hard to keep your eyes off of them, but will you live a story of romance and conquest, will you be truthful to the one you fall in love with? Or will you embark on a voyage of voyeurism and debauchery while trying to have them all?
In Nursing Back to Pleasure you will heal Charlotte’s body and mind but will you also embrace her loving heart? Could you be able to nurse Hazel’s cold heart and see what levels of pleasure lie beyond? Will you fight and break the chains of Lisa’s chastity vow? Or will you simply dive into Nicole’s appetite for sexual debauchery and infidelity?​

+ Changelog
Final:
In this final Episode we get to see the endings of Lisa, Charlotte, Hazel as well as the Church ending. As I previously said, the decision was made to cram all the endings into one final version in order to allow everyone to play as much content as possible before the inevitable ending of the game. That means that while this version is packed full of content consisting of 380 new images and animations you probably won’t get to enjoy all of them, depending on your relationship so far. For example if you are only with Lisa and do not use any of the cheat codes provided in the walkthrough then you will probably have a rather short gameplay to go through. I thought that a heads up would be just fair.

With that said, if you are a new Patron and this is your first time playing the game then you are in for a really nice ride. There is also a lot of content for those that have more than one relationship or use the cheat codes provided, not to mention the Church members.

Episode 13
This Episode brings 320+ new images and adult animations as well as an exciting story and the first possible ending for the game. As you know from previous posts this ending will be a threesome with both Charlotte and Lisa and this Episode is mainly focused on it. In order to access this ending you have to meet some conditions which are explained in the walkthrough or you can use a cheat code to access it directly. I wouldn’t recommend using the cheat code but if you want to see it and don’t want to replay the whole thing then go for it(you can also find it in the walkthrough).

This Episode is also slowly building up towards the first endings and we’re going to get a couple of them in the next one. I had a great time working on this one, there are a lot of intriguing story developments but I’ll let you find them all for yourself.

There are a number of choices that are important but also a lot of repercussions from your previous ones, this Episode is full of different ways of things happening depending on how you guided the story so far. (Basically, there’s no way to access all the content on one single save game but it does add to the replayability effect)

Episode 10
Episode 10 brings a total of 370 new images and adult animations, bringing the total number up to an amazing 3300 images and animations. It also brings a solid number of choices with various impact from low to medium to long lasting. As usual you also reap what you sow in the previous Episodes, some of your past choices impacting events in this Episode.

Besides the usual continuity of the main story line you also get to impact other side events that offer more immersion and depth as well as some rather interesting Church of the Stag content for those truly devoted.

The usual twists and turns are also present so strap yourself in for a very interesting Episode.

The Episode brings 330+ new images and adult animations (bringing the total to almost 3000) and a substantial story progression among other things.

Nursing Back to Pleasure Episode 8
This Episode also includes the exclusive Church of the Stag content that Tier 2 Patrons received last month, bringing the total number of renders to 330+, including adult animations. In this Episode the narrative is driven mostly by your past decisions, so if you are in a relationship with any of the girls you will get to see exclusive content to those girls. At this point in the game it would be counter productive to keep adding choices that build up relationships seeing how there have been a decent amount of those already. Episode 8 is a bit more “chill” than the previous one but it has its fair share of intrigue and excitement.
Episode 7
This Episode is the second largest, bringing 386 new images and adult animations, bringing the total to a impressive 2267 renders. But that’s not all this Episode brings, if you are in a relationship with Lisa you get the chance to advance that relationship even further between the sheets. Hazel also strikes with Cupid’s arrow in this Episode if you are involved with her, intimately. There is a lot of story development on all fronts including intrigue and debauchery, lust, sin, and so on.

The Church of the Stag story line also advances quite a lot, it is here where you meet Kate and dive into the twisted and indecent world of the Stag. The faithful and devout will be greatly rewarded, the most pious of all will reap the most rewards. This side story line now becomes option as you get the chance to become a member or refuse. This story line will take you to new and old places at the same time, such as Lancaster Boarding House (In Episode 8) .

Nursing Back to Pleasure Episode 6
This new Episode brings 330+ images and video animations along with a rich story development and some seriously naughty adult scenes. Even more, in Episode 6 you get to have a first look at the Father Jack’s “Church” and learn a good deal about it as you find yourself inadvertently passing the first two trials of the joining process. This part of the story is optional as in the next Episode you get the choice to join or not to join.

Depending on your past choices you get to be erotically involved with some of the characters or none at all and as usual, some of the choices made in this Episode will influence the next ones.

In case you missed it, there was a small plot hole at the end of Episode 5 in Hazel’s room with the burglars, that has been now fixed and it is as if nothing even happened. These small errors tend to happen now and then but they do get resolved. You might also encounter some spelling problems but most of those also get resolved once the French translator goes over the text again word by word.

Nursing Back to Pleasure Episode 5
This Episode is by far the largest one yet, it features 400 new images and adult animations, new sound effects and music. What’s also special about Episode 5 is that you mostly reap the rewards of past choices so if you’re in a relationship with Charlotte you’re going to get more Charlotte, including some hot scenes and that also goes for Hazel and Nicole. Lisa is also featured in this Episode, in smaller doses.

Nursing Back to Pleasure Episode 4
This episode brings a ton of new content, a total of 340 new renders and and animations along with new music, sound effects, spelling errors fixes and much more. The real strong point of this Episode is the story development because in this one we get the chance to cement an intimate relationship with Hazel as well as with Lisa. These chances only come around once and depending on your past choices you either get to start these relationships or not (if you cannot, check the walkthrough for more info).

Even more, depending on your past choices, this Episode becomes deeply influenced when it comes to story telling. (!Small Spoiler!) For example, if you played the blanket game and are in a relationship with Charlotte she puts an end to the blanket game but if you are not in a relationship with her, the game simply goes on. This is only one example but there are a few more turns in the story like this one depending on your choices in the past and you’re going to see them for yourself.

Nursing Back to Pleasure Episode 3
This Episode brings an incredible 310 new images and adult animations, new sounds, new music tracks and much more! It is by far one of the largest Episodes ever produced even considering the previously completed games and it brings a fair amount of gameplay time with it.
Episode 3 also brings a few very important choices, depending on them you can start new relationships with Lisa and with Hazel and you also get another chance at Charlotte if you want it (the last one). Be careful with your choices for you might not get a chance at a do over in the next Episodes. As with all the previous games, you can at least for a while try your luck with all the girls and then chose one to stick with or you can chose your favorite one right now.
The story is advancing very nicely, there are some plot twists that will leave you in in awe, things that you never thought of seeing. But these plot twists are not all fun and games, a bit of drama is sparkled here and there but nothing too much.

Nursing Back to Pleasure Episode 2
This episode is packed full of content, bringing 280 new images and some adult animations as well as well rounded story development. Episode 2 is much larger than the first Episode bringing a lot of play time and goodies for you to enjoy.