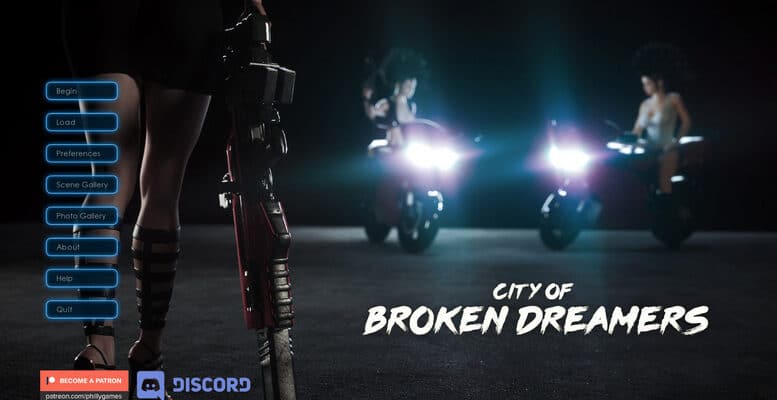 Los Angeles, 2042
The City of Broken Dreamers is a city ruled by corporations… A city ruled by the elite… The city that exemplifies the best and worst of the American Dream…
Millions live their lives in almost blissful ignorance of the excesses of the rich, or the degradation of the poor. Executives hold more power than politicians, the police hold less power than corporate mercenaries.
You are one of those mercenaries, one of the best, and elite tier called Ghosts… but you haven’t taken a job in months. That is about to change.
Elsewhere in the city, a young girl is about to become the center of a conflict that could tear the city apart.
As you track her down you’ll have allies and enemies, others like you who have been used by the city and spit out. Who will you trust? Who can you afford to?
Each of them has their own dreams, their own motivations, each is broken in their own way. All of it will come together…
In the City of Broken Dreamers…

v1.02 Count updated for Steam release (technically the same as 0.7)

If you already have 0.7 you should be fine, there are only minor adjustments to this one. Typo fixes, some balance changes, and a few minor bug fixes.

v0.6.1
Some experienced an issue in the interrogation scene. That is resolved.
Ability to rank up lust score with Katie has been resolved.

v0.3.1.1
Fixed an image in the wrong location
A variable detecting if u found a secret camera fixed
A few typos

v0.2.1:
Chapter 2 is out! Again, a lot of work went into this one. Expect things to slow down a little in the story, because now it’s time to learn about the characters that populate this world. There are a few branches in this one, but don’t worry, choosing one will not lock you out from characters down the road but will certainly help you. I would suggest you try them all.

Going forward from chapter 3 and on I will also include update patches so that you do not need to download the full game. I had to restructure how the game was built on the file structure side so I was unable to do the patch build for this one, but its prepped and ready for that in the future.

Also note: there is a scene that may not be everyones cup of tea. It is not typical, and also hard to get. You can also skip it if you want.
Change Log

v0.1.1:
Various grammar and spelling fixes.
Fix to the 3rd item in the replay gallery

587 renders
3 Hidden Custom Renders
35 animations
13 music tracks 12 or which are fully licensed to the game the last being free.