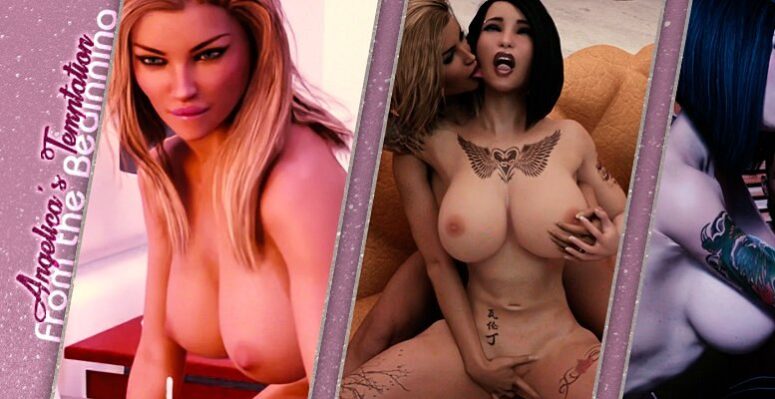 This Adult VN tells Angelica’s story; she a nymphomaniac who has been married to Henry for ten years. But their relationship is no longer the same. Henry is working too much, and they haven’t had sex for a long time. The main issue with that Angelica never told her husband about her disorder. She’s been struggling with this since she was a teenager, which caused her to experience many things before she was married, things she’s never told Henry about. One of those things is that although she currently has her disorder under control, some people have the ability to trigger it, especially Aria and Mark. Aria is Angelica’s best friend. She’s one of the few people who knows about and has witnessed her disorder, the “real” Angelica. As for Mark, he’s Henry’s best friend who’s going through a divorce and “needs” a place to “lay low” for a while. The problem with that is that Mark also knows about Angelica’s nymphomania. This is where we start the game. Will Angelica succumb to the temptation that both Aria and Mark present? Or will she succumb to her disorder? Her destiny lies in your hands…

0.2.7 Changelog:
Fixed previous bugs and adjusted some stats in the script, so it becomes more coherent.
This update adds 35k+ Words
500+ still images
26 animations in Angelica’s Temptation: From the Beginning,
Total rendered images: 1555.

v0.2.0 Patreon
– I Split the story into ten paths, some may not look very obvious, but most are!
– This update brings 1.071 new rendered images, which are 600+ still images and 17 animations!
– 30k+ Words
– I also removed an option that was leading from the last update that was leading nowhere.

v0.2.0 Public
I Split the story into ten paths, some may not look very obvious, but most are!
This update brings 800+ new rendered images, which are 500+ still images and 15 animations!
25k+ Words in Angelica’s Temptation: From the Beginning
I also removed an option that was leading from the last update that was leading nowhere.

v0.1.7
– 250+ Renders
– 7 Animations
– 12k + Words
– Converted all the images to .webp (That is the reason the file size dropped so much)
– In this update, I started to split the routes and added choices that can fully close Aria’s love path and Mark’s love path, maybe it is complicated to find it, but it’s there, also added the first sex scene with Henry.
– Fixed a bug that was locking Mark’s love path; saves might not work after this bug fix, so I’m sorry for that, guys!

v0.1
Intro with some playable content
The intro is a little long, but it’s worth playing through
Added some animations and sex scenes in Angelica’s Temptation: From the Beginning