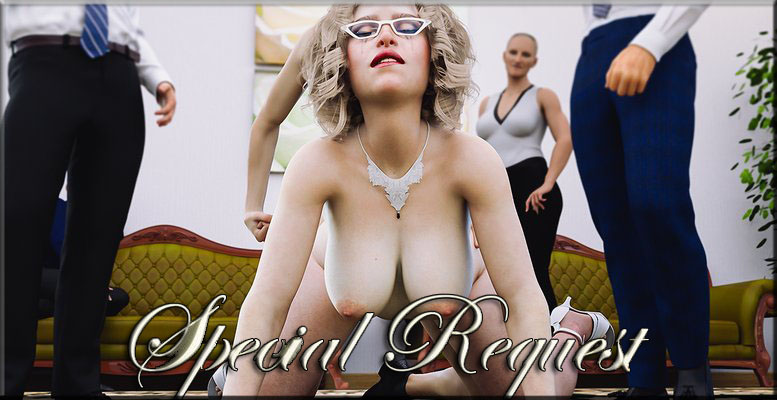 Special Request is adult game about a successful woman that gets involved in somebodies’ game behind her back. The story will lead to the discovery of some secrets in a City, and the once sunny environment will show its dark side now. The main protagonist will have to endure mostly blackmail and corruption, but there will be other fetishes to meet as well. Will she be able to fight her life back again…

+ Changelog
v1.4
Change log:
*Over 500 images.
*36 animations.
*2 events in “Pants & More.”
*The hotel storyline goes further.
*The brothel storyline goes further.
*The punk event you voted for this update. I know someone who has been *waiting for this so much!
*Beatrice has a scene too. It will be slightly lighter this time.
*New event with Pecker in the park.
*The priest in the church at night gets tempted even more!
*Don’t eat the cake! Laura can get pregnant…
*Laura receives news from her hubby.
*Over 2000 re-rendered images and very many animations.
*Added “Pride” and “Submission” stats. If you start a new game or use bridge – *fine. If you use your old save, Laura will ask you to choose her character type at some point. It will influence the game already in this update.
*You can change textbox opacity in preferences. Letters have black outlines to make them more visible.
*Many more little tweaks and polishings.
*And most important! If a player wants Laura to be as pure as possible, he can get only one event on this update! Greetings to social justice warriors out there! I warned you…

v1.3
About 500 new images
32 new animations
New event in the church during the daytime if the priest is corrupt.
New event in Gunnar’s shop on the map.
New customer for PAM and new Special Request.
New event in Brothel.
New event in Hotel.
10 new events to the scene gallery.
in The Hall of Shame, replaying home scenes, you can pick Laura’s outfit.

v0.8
Two in-game days
over 600 renders
16 animations
New Pecker sidequest in the Park during the daytime.
Replaced repeatable events in the PAM office
Three hidden events*
New characters in Special Request
One new place
And the event that you probably were waiting for the most!

v0.65
A scene gallery called “Hall of Shame” added to the game menu.
90% of old pictures re-rendered. The only ones left are early scenes with Donald.
All of the animations re-rendered
The shower screen removed completely starting from day 2. It can be accessed through the “Hall of Shame” now.
no new story content