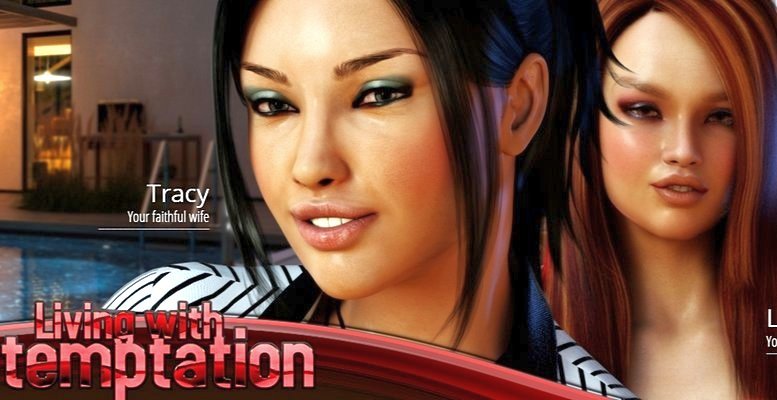 Be the perfect husband. Help Tracy with the household chores, take care of your baby, earn money and spoil her with your kindness. Rediscover the pleasure of sex and have kinky experiences with her.

Fall in love with the nanny. Spend time together, offer her fancy gifts, take advantage of every intimate situation and steal her heart. Meet her hot friend and flirt with them both. Yield to temptation.

Play with their desire for you. The more attractive you are, the better your chances for getting into their panties. So work on Justin’s statistics, like in a RPG game, to become the hottest guy in town.

ABOUT THE Living with Temptation
Many people remember the story of Justin and Tracy: A newly married couple who hired a beautiful and sexy foreign nanny to take care of their four-month-old baby when Tracy returned to work. Players took on the role of Justin at a critical moment in his life, when difficulties between him and Tracy threatened to end his marriage, and a lack of sex had him looking at other women. The situation gets more complicated as the gorgeous young nanny, Lisa, turns out to be a temptress, with friends that encourage her to catch Justin’s eye. The game required Justin to navigate a complicated situation, torn between his love for his wife and his lust for the other woman, who was living with them under one roof for the whole summer.

Now, many years after the release of the original game, we want to come back to that story and present it again with more depth. To tell the story more thoroughly, to allow the player to learn more about the characters, and to give more opportunities for arousing adventures. In addition to adding to the story, we’ve upgraded all the visuals as well. All images are presented in 4K and animations now include a breathtaking 40 frames. Even the locations have been upgraded and new locations have been added.

Our plans are very ambitious. With this first release of the upgraded original game, we hope to re-ignite your love of Tracy and Lisa. Next, we hope to keep that love burning hotter and longer than ever before with multiple expansions. Next on the list will be to release an upgraded version of the much loved WIFE GONE WILDER expansion. After that, we will continue to add to the game with new scenes, new characters and locations, and new sexy fun.

So we encourage you to try this new version. In addition to the content and visual upgrades, we’ve adjusted the gameplay to involve less grinding, and more varied options for daily actions. The game should still be a challenge, but with many more ways to succeed than before. We’ve worked hard to add some extra magic, and hope we’ve made the whole experience something that both old and new players will love.

QUESTIONS TO BE ASKED
Imagine that you haven’t had sex with your wife for almost a year. Are you going to fight to reclaim Tracy’s passion, or are you going to take a different path and focus your efforts on Lisa, the young nanny?

2022-06-09
Living with Temptation New expansion released!
Wild weekends and Wife gone wilder
Please welcome the biggest update to any of our games that we’ve ever developed!