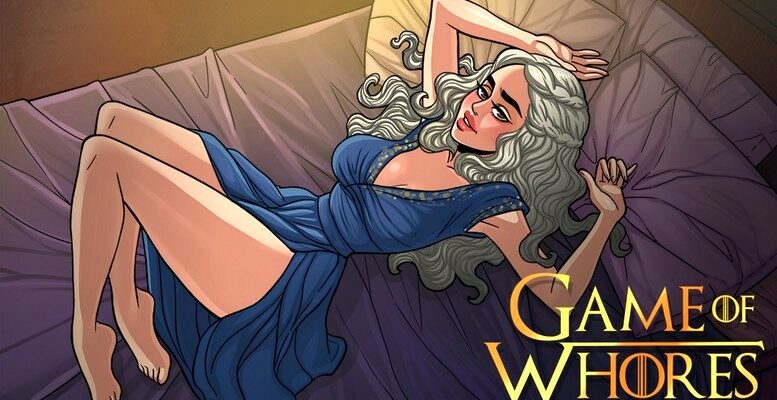 In Game of Whores you play for the former manager of a brothel, the goal is to return to the business and at the same time to help the 3 main heroines of the game to achieve power and influence.​..

v0.22:
– We hired animator, from now on most of new sex scenes will be in a format you see them in this update
– We added functionality into brothel, you can not only visit it, but also manage it, it’s still early in development and many more features to come

v0.21
– Escobar design has been edited

v0.20
– From now you can sell panties at the market, ask Rodrik what’s new
– You can also buy cucumbers for Daenerys at the market, and give it to her later, it will temporarily change her keyhole scene

v0.19
– Endless menu options in the shop were fixed
– Vote counter was updated

v0.17
– All reported and known bugs were fixed

v0.16
– All reported and known bugs were fixed
– Minor UI improvements and new dialogue box
– “Clear the gallery” button in preferences for players who like to start fresh, we highly recommend to do that before starting the new update as an order of a several scenes was changed
– Pre-competition story was partly revised, rewritten and polished in order to suit main story better
– First round of the competition was replaced with a new one to suit main story better
– “Fruit game” with Daenerys was relocated from the garden, from now this is her 5th Quest

Game of Whores 0.14
— All reported and known bugs were fixed
— Sansa’s quest №2 temporarily removed, would be replaced with another one
— Vote counter updated with the most recent poll results

Game of Whores 0.13h
– All reported and known bugs were fixed
Added:
– Scene replay gallery, once scene is being unlocked you can replay it from the main menu, currently 12 scenes available for replay, the rest would be added in 0.14
– First music theme!
– Redrawn “masturbate on Sansa” scene, preparing the game for upcoming “Day-Night” cycle mechanic (Poll winner)
– Around 20 skimpy clothing items adopted for each girl (Poll winner)
– First part of the cleaning mechanic, currently only for Sansa, to unlock this ask her to clean Cersei room before she moves in, not Dany
– 19 random text events after Sansa ends with cleaning
– Sansa watching you and Cersei having fun CG scene
– Interactive CG scene with Sansa while she does cleaning:
~ Spanking
~ Cunillingus and anilingus animations
P.S. Scene to be expanded. Same styled scene would be added for Dany soon

Game of Whores 0.11:
As we reached $3500 goal on our Patreon, we’re keeping our promise and adding the new character into the game!
All added costumes were suggested and voted by $15 and above tiers Patrons.
Added:
– New credits screen added to the main menu
– New background added to the clothing shop
– New original character – Mara, from now she’s taking care of the clothing shop
– 2 Mara’s quests
– Animated titjob scene with Mara
Sansa:
– 3 new costumes
– Animated blowjob CG scene in the garden
Daenerys:
– 2 new costumes
– Now you can play with her boobs in the room if she’s being topless, based on TheBigBg mod, thank you for idea, buddy!
– Solo CG scene in Wonder Woman costume during her walks
Cersei:
– 2 new costumes