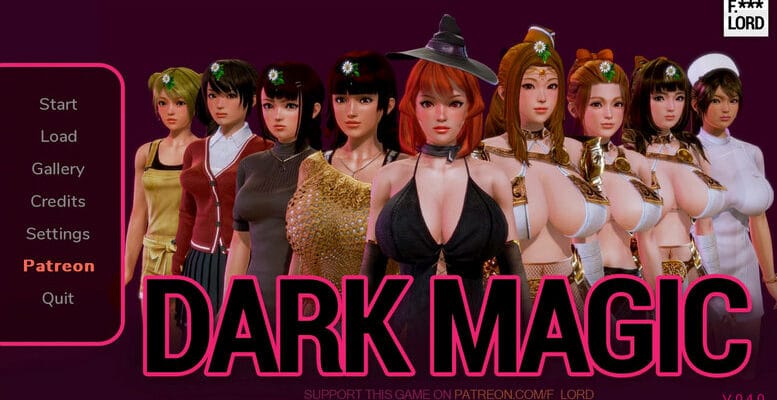 The story is all about you (the player), an only man in this town. They don’t really know what is happening with all of those men. It has been a long time since the last man was born. Until you! You were born and grow up in a small family with nothing special. Your life is moving in the linear direction with an extra boring in it until you’ve met with someone… Someone who will change your life forever!

This version update contains events that take place in the castle on day two. It is an event that will happen in one day but is packed with many events. I think the content in this update has a variety of emotions for you to experience. Please enjoy.

+ System & Contents Update:
— Reversed RenPy version from 7.4.1 back to 7.3.5
If you load the game and see the normal error prompt, press «Rollback» or «Ignore» to skip it. That’ll happen because of the differences between versions.
The reason I updated to RenPy 7.4.1 (latest version) because I thought it will improve the performance but instead it caused me more problems.
— Fixed Airi massaging sex didn’t trigger when select.
— Changed «Learn more magic» quest conditions.
— Added missing dialogues.
— Added more messages in Magic Notes.
— Added version cover in Book of Memory for save file thumbnail.

+ Events Update:
This update is a night one inside the Castle after you got attack at Nami’s house. The Queen seems to be both worried and happy to see you. She gives you and our family help, and she only needs one thing in return is a friendship.
— Update estimate playtime (V.0.12.3-V.0.13.5): ~1 hours.
— Start from beginning estimate playtime: ~32 hours.

+ Events Update:
This update is a night one inside the Castle after you got attack at Nami’s house. The Queen seems to be both worried and happy to see you. She gives you and your family help, and she only needs one thing in return is a friendship.

v0.11.1
– Fixed minor bugs.
– Fixed bug that caused the game to stuck.
– Fixed some typo.
– Removed auto-update file from the start of the application.

++ Events Update:
– This update will focus on the Magic route. The event will start after Airi found a mystery box as Red Witch told her.
– New scenes with Emica after induction day.
– New scenes at the School & Clinic.

And as always, I want this game to make you feel happy. Take care and stay strong in a situation like this!

With love and respect, F. Lord. 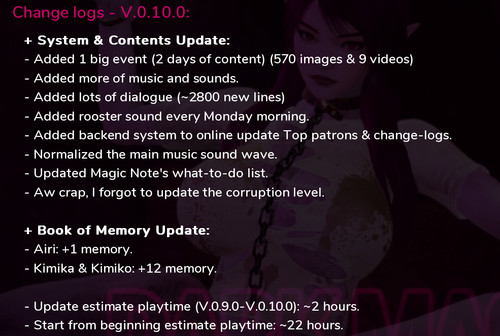 ++ Events Update:
Some said it’s a spoiler so I will sum this update up.
– This update focuses on the MC soldier path, which means you’re going to see some of the familiar characters and a lot of new face characters who’re going to join in the world.
– A lot of nice and touchy moments with your friends and family.
– It’s also a big update for Yasuko’s storyline.
And as always, I want this game to make you feel happy.
With love and respect, F. Lord.