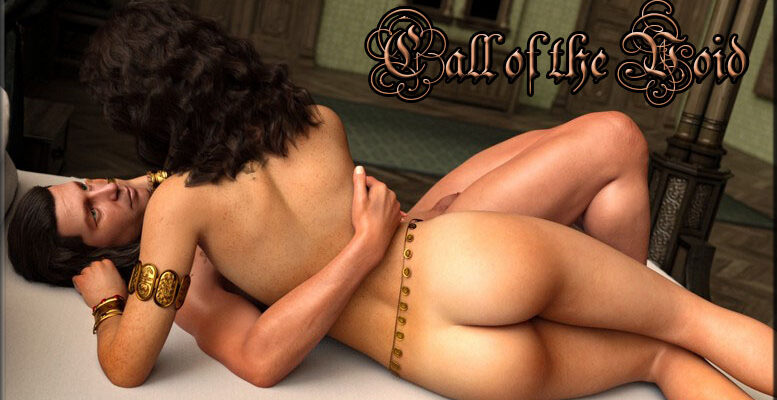 “Call of the Void” – is a sandbox game where every decision you make can drastically change the course of game’s story. Skills we’ve acquired while working on the first game will be utilized to the fullest while working on this project. The game will still be heavily story-oriented, however, this time you are free to choose what to do in the game’s world. As for the render’s quality, I think you’ve noticed the gradual improvement in quality over the period of work from the last project and I keep learning new stuff. Talking about sex scenes, you can expect the same quality if not even better than in my first project. “Call of the Void” is a redesign of our ideas. A new project with the same old approach to our work and style…

+ Changelogs
v0.32.03
The update 0.3 itself added more than 16k of words
Main content:
1) Big update of Ilga’s branch. There’s a new event with her and new dialogue options in her house. Other characters will get more attention in the next update.
2) Another little expansion of the main story where you’ll be introduced to a new (and the last one) story character.
3) Rework of a hidden event. It has new renders and text now. I truly like this event and I think it might become a good story, that’s why I decided to completely rework it. This event will continue to be developed.
4) New events with Kagera, Kilena, Mrysia and other characters. Mrisya’s story got a logical development:) New scenes with Londa in the bathtub and girls in the brothel.
5) A lot of new random encounters both in the town and by the river.
6) The foundation for the holiday event. So far you can only to talk to Kilena there, but we plan to add options to participate in dances and other more interesting activities.
7) Church location.
8) Some additional scenes for immersion.
Technical stuff:
1) Auto-fight button if you play on easy/medium difficulty. (Still being tested). It doesn’t mean 100% chance of victory. The fight will be executed automatically and based on your chances to win you’ll have the corresponding result.
2) The massage and prayer will give additional buffs.
3) The option to choose an alternative font in the settings menu. Officially only one font style will be supported but you’ll have the choice nevertheless. (Naturally this might lead to bugs).
Developer’s saves:
The archive contains 4 saves. Rus/Eng. Easy/Medium difficulty. The prologue and first event are finished (Ilga’s rescued).

v0.20.01:
Main content
1) A big amount of new content for the main story
2) New events with Ilga
3) New events in the inn
4) New events in the bathhouse
5) New events in the brothel
6) Two new characters
Side content
1) Random events (not so many of them yet, all in the town)
2) New enemies. New location (river), along with new monsters, events. New bandits in the town.
3) New dreams
4) New trade options
Engine changes
Game play changes
1) New memory section (option to replay scenes, your achievements)
2) Many interface changes (still WIP)
1) Added new variables «chance to miss» and «chance to block», depending on your strength and agility
2) A serious bug occurring during a combat when an enemy was using the MC’s last foe’s block settings and not his own was tracked down and fixed
3) Rebalance of rage attack
4) Rebalance of some monsters
5) Option to open your inventory when in a battle
6) New option «eye the enemy» (this option isn’t exactly useful at the moment but we’ll keep working on it)
Many new other little fixes and changes to balance

v0.10.05
– Improvement of the English translation;
– Option to switch between languages in android version.

+ Cheat Mod
Installation:
– Rename downloaded file to 0_COV_MOD_jsbb.rpy
– Put file in “game” directory
– Click on JSBB on the bottom right of the game GUI to access the cheat menu
– Cick on ZAP on the top left of the game GUI to refill HP/RP/MP/Money/Wash/etc

Notes:
– Should work on future game versions. Please try before asking.
– If there are other Modders that have the time and commitment for this game’s cheat mod,
please do not hesitate to create your cheat mod, i will discontinue updating this one and will use yours.
– yes i am very lazy, so expect delays and cut-corners attitude