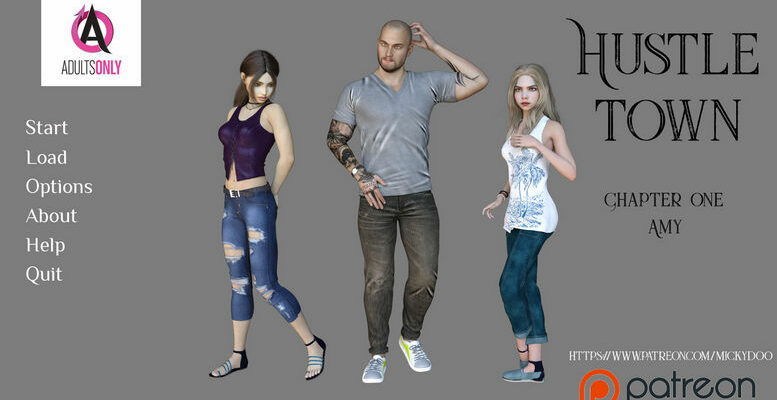 The game is set in an European town, your Uncle used to be a big shot there and you visited him a few times as a kid. He is retired now and mostly sold up but he still owns a cafe and a hostel, so you get free food and a free bed. The reason it’s called Hustle is you essential have no money and are to lazy to work for any, you have a few dollars to buy a joint and a beer now and again but that is about it, you need to hustle everything else. You come across a variety of girls and the only way to bed them is to help them out, so you have to hustle whatever they need, or you need, to bed them…

+ Changelogs
Complete:
It’s done and dusted folks. The MC goes out with a bang, well several of them. Thank you all so much for sharing my journey, your love of my story has kept me going. I will do something with the girls from Handorf down the track, I love them and already miss them, but for now, it is time to move forward. I am already working on a second game and will post some more info on that in the next few days. For now, just enjoy what time we have left in Handorf, play it slowly, take it in, it is no work of literature, it’s just a goodbye (for now). Once again thank you all so so much.

Episode 13 Final
This episode is also known as the final part one. It is written differently, its just free flow, no map, no visiting, just story. There will be a second part to finish the game up.
280 images
10 animations (something like that anyway)
One of the animations has no sound and one has a hair in forehead issue, I have left them for now or I’ll be fucking about for another week at this rate.
There is no android version, they are breaking when I try to build them. As I have nearly finished I will try and fix the android issue when it’s all done and dusted.
Hustle Town will continue as a comic series maybe, hopefully, if I get time, just for nostalgia and lolz.

From the get-go more or less you will get the choice to follow two different paths. As they progress, sometimes scenes will differ and sometimes they won’t. It is written in such a way it does not matter which one you follow, or if you choose to go back and play the other one. The final outcome is the same, you just pick up different information one way, a different H scene among other things, For maximum lolz I suggest playing them both.

I tried to change the render every time the scene differed but might have fucked up and didn’t once or twice so be careful when you skip. The last day is the same for both paths.

I made a bug on the last day, because of what happens in this episode, it comes down to two different girls you can see at night. Depending on what path and which one you see first, on the last day there is no one to see. If so click on the kitchen icon on the bottom and it will jump you to the last day, I will work out a fix later. (I mention this in the game.)

There could be some slight image errors and it has not had it’s proper proofread. And ignore the closing credits, I have not changed them yet.

The other one has 2 different animations (well 2 and a bit), 2 camera views on 1 of them, 3 on the other, as well as a speed button. It also has a bit of animation on the end which in my opinion is worth the admission fee alone.

Episode 10
230 images
One sexytime animated scene.
Was meant to be two but I fucked it up and only realized today. (It was a bonus scene anyway).
One other sex scene.
A lolz animation.
This whole chapter is written from a different perspective, I hope you like it.
Please use sound, apart from the sex scene there is a couple of lol scenes.
A volunteer has been going through the whole game and proofreading with a fine-tooth comb, they have done it all bar this chapter. I have not put his corrections in as yet, I will before the public release.
I have also fixed a bug on the map from way back at the start.
I Have also re-worded some minor dialogue from the start.
Also, I made a jump around the cable TV game, too many ppl were getting stuck on it and I got sick of telling them exactly how to do it because renpy sucks.

Episode 8 is done.
204 images
1 static H scene (depending on who you see one particular night)
2 Animated scenes
I have made a new way to display animations, there is no need to use the keyboard anymore, if there are any angles, etc buttons will appear at the top right of your screen.

About this episode.
This will be the last episode for the year, I do not plan on releasing chapter 9 until early February. I need a break for a little bit, then I am just going to plod along for a few weeks with no pressure. I will be working and will update, it will just be at a slower pace. I figure during the festive season fewer people are concerned about lewd games.

That being said, I tried to make this with the feel of a final episode of a season, sort of a one-off special so to speak. Instead of going around the map each day seeing the girls, each day is a day with one of the girls, with parts that overlap. Some mean something, some are just fillers. A lot of it is in first person too.

About the final scene.
In the final scene you are talking to someone, lets say there are 10 pics in the scene, I have put a long fade between each one and the conversation between each pic makes no sense at all to the previous one, this is an attempt to imply time had moved on and make it seem like you have been there for hours. I would like feedback on this to see if I pulled it off.
As per normal I will add an Android and Mac version when I know it works fine.

v0.7
Chapter 7 is out and hopefully all is well.
230 pics
Three lewd animations (you will only see two)
Depending on whether you decided to use blackmail or thievery to get the key, one will lead to an animated scene with an NPC which leads to a progression with her.
In the next episode, there will be a similar thing with another NPC. There will be a scene eventually with all the NPC’s, just can’t say when or how.
The last two animations are done differently than all the rest, I only learned it halfway through this release, there is no sound as for now.
In one of the animations there is hand fuck up, I know, I will fix it, but there is a bigger fuck up with losing the scene so its not easy.
I have also ran the whole script through google docs and Grammarly, I hope I didn’t break anything.
As usual, give me a day or two to make everything is ok and I’ll post a mac and android version.

v0.62
221 images
Two animated scenes
One non-animated scene
A few fuck-ups
I was trying to link the seeing the girls to the day’s events but it was beyond me
Depending on the question with Zoe last EP two different things are set up
You have to make a decision regarding the real estate boss for upcoming episodes
You meet the idiot twins sister, be careful how you answer
Someone makes a surprising visit to the game storyline
All the main NPC’s are set up to be closer to the gameplay
I have cleaned up and optimized the image folder, this release is actually smaller than the last one.
Fixed two image issues that were pointed out me
Updated the girl’s stats that was also pointed out to me

v0.51
190 images.
3 animated scenes (1 depends on if you hid behind the bin the last release).
Not fully proofread as my proofreader is sick.
I’ll have a MAC version and an Android version in a day or two, I like making sure the pc is fine first as it takes me quite a few hours yo upload them.

v0.41
185 images
4 animations (2 sex scenes with 2 different angles)
Lesbian voyeur scene hooked into one of the sex scenes
You can now see the girls in the evenings
You can use the car you found to a degree
It’s set up for a side mission with Belle and Nicky
Made a mac and android version as well

v0.3
135 pics.
3 animations, 1 from 2 angles.
2 sex scenes (you will only see one as it’s path orientated).
NPC’s added for the story line.
You can chat up the librarian, if you have not met her you will. (This is just a test thing for now)
A lot of town mystery added.
Fixed an old bug from the first release.
Fixed an image issue with Nicky and Jade.
Fixed the stat screen.
Removed the gallery. I have been doing the hard way and it’s got to hard, there is an inbuilt renpy way, I have not got my head around that as of yet. (I will)
Sometimes inside the hostel I have disabled the room maps except the one you need, it bugs out on me, this is an easy fix for now. Every release has an isolated map from the last one and each map coding is improved as I learn, I’ll work it out sooner or later.
Fixed the stat screen, it will only update from this release.
Made the dialogue box a bit darker as suggested.
Added a closing credit screen as suggested.
Ran the previous script through notepad + and fixed old typo’s.
This script was ran through it first so it should be a lot better.
Changed the wrong spellings of Mikayla to Mikayla, found about 10 -15 of those spelled three different ways.
Discovered that if you ever make a game do not use names that are a prick to spell.