Lena and Ian are two very different people who find themselves in a very similar moment in their lives. Both struggling to achieve their dreams, both hurting because of love. Their lives will become intertwined, with each other and with several characters that will impact who they are and who they will become. They will be able to experience the heights of love or the depths of lust, friendship or betrayal, moral or immoral, success or failure… And you will be the one to choose. But one’s choices can often tangle together and lead to an unexpected mess, so be mindful, for you thread the thread of their Red String.​..

0.8 Final
Added two new, fully fledged sex scenes: Ian x Emma and Lena x Mike, with 10 new flull-screen illustrations, with variations and 1 new animation.
Now Lena can choose to wear two necklaces during her concert, and they will also show up during Ian x Lena sex scene
A new illustration for Lena x Mike sex scene in Chapter 5 and a reworked illustration I wasn’t happy with.
I retconned Lena handing Seymour Ian’s book. Now she hands it to him at the start of the photo shoot in Chapter 6
Added an option to skip Ian’s heavy bag boxing minigame in Chapter 5
Added the missing cameos

v0.7 Revised
As I’m working on Chapter 8, I’ve also revised a couple things across the previous chapters. I’ve gone over Ian and Wade’s interactions, since there were some incongruities after tweaking Wade’s job situation, and this also allowed me to revise his and Cindy’s introduction in Chapter 1.

Having to work on the game release after release, and trying to publish them as fast as I’m able, means that I rarely get to revise what I wrote and polish things. I’ll admit I’m not a fan of going over what I wrote over and over again, but in this case I think that first scene flows better and represent the characters more accurately, since I didn’t know them as well as I do now when I first started writing them. It’s a minor thing, but to me it’s important!

I’ve also added two new tracks to the soundtrack, now Cindy has her own dedicated theme, as she should! When she appears on screen she usually steals the show, and she needed some music to highlight the impact she has.

Anyways, just a few small changes but I thought they were worth re-releasing this last update.

v0.7 Beta
It’s finally here! Chapter 7: Heavenly Sins is finished. The Beta corrects a few minor bugs and spelling mistakes present in the Alpha and adds a few tweaks to some scenes that I felt needed to be modified, but it’s subtle stuff. Updates to the Agenda section are still needed and will be implemented in the Final version, which will also contain a new sex scene, so stay tuned for that!

This has probably been the most challenging update I’ve pushed out so far, and it took me longer than I anticipated, but I think it’ll be worth it. Thank you so much for your patience and support, and I hope you really enjoy this one!
This update is packed with the most amount of content I’ve ever crammed in a single episode, it has 80+ full-screen, full-color illustrations, 20.000+ lines of narrative code and sex scenes with over 10 characters. Be mindful, to see all possible events you’ll have to go over the chapter at least two separate times, and a lot of what will happen is dependant on your previous choices.

Did you Lena tell Louise about Jeremy’s games, causing them to break up, or are they still together? Did Lena sleep with Robert or rejected him right away? What’s Ian relationship to Emma, Alison, and the other female cast? Try different choices to discover wildly different scenes.

v0.6 Final
Thanks to everyone who helped me polish this and reported any bugs. Everything should be fixed now, and I also added a couple new small features.

Updated the Agenda information and created missing character profiles.
Added the option to manually name individual saves (thank you Lara for your mod!)
Ironed out minor bugs that could cause compatibility issues moving forward (thank you BloodyMares and Cabot, and anyone who reported them!)
Cleaned remaining typos and grammar mistakes (thank you again, vBerlichingen!)
Changed the variable requirement for the appearance of certain character (can’t say more without spoiling it, so I’ll talk about that more in depth in a later post)

The Alpha was pretty stable and only minor bugs had to be fixed. Here’s a changelog on what had been altered:

Added a new dialogue option to the Cherry/Alison bar scene that will be relevant in the future, but it doesn’t add a new variable. It just transforms an old one from True/False to a numerical value.
Fixed a loop that was present in Chapter 2
Fixed story inconsistency regarding Wade
Fixed various graphical bugs
Fixed minor coding bugs
Fixed a few spelling mistakes

There might still be some minor bugs or inconsistencies, so please let me know if you find any!

Working on Chapter 6 has been a very big challenge. It packs the most content and art from all the updates I’ve ever produced, and I’m very proud of the result. I hope you guys enjoy it and to have made your wait worthwhile.

I’ve tried to make the story and character interactions advance and some are already ripe, while others are steadily moving to their climax. There’s still a lot to come but I think Chapter 6 will feature a couple of very anticipated scenes, some of which can be rather unexpected… And also it includes that big surprise I’ve been teasing these past couple of days, and it’s something long-time patrons will surely enjoy.

Anyways, it’s better if I shut up and let you play it. I’ve done a through bug-testing and BloodyMares and vBerlichingen have been incredibly helpful, going out their way to work on the script with me with proofreading and bug-testing. There’s bound to be a little bug here and there, but it shouldn’t be anything major. If you find any, please let me know down in the comments.

v0.5 Enhanced
So, what’s new in the enhanced edition?
I’ve added a couple things to strengthen the driving narrative of the story, making Ian and Lena’s personal goals a bit more clear. Lena’s situation at the café is also re-worked and better tied to the narrative and gameplay.
I’ve added a few new interactions with Axel and Ivy that will open up interesting plot points in the future. Not including them felt like a missed opportunity.
I’ve restructured Ian’s training sessions to be more coherent. I dug myself in too deep giving the option to choose between two martial arts, but it’s something I wanted to explore. Now the progression is clearer and makes more sense, and there’s also a new goal related to that path of the game: an upcoming tournament!
I’m reworking Robert scenes to make him more likeable. Don’t worry, you’ll still have the jerk you love to hate, if you don’t correspond his advances. But I felt Lena had a lack of appealing options 5 chapters into the game, so I want to make Robert fun to pursue if you as a player are into it.
There will also be a new naughty scene you’ll see over the phone… Just make sure you’re in good terms with Jeremy ?
I’ll implement a way to track the current day in game, so you always know where the scene you’re playing is happening in the chronological order.
I’ve also made some minor tweaks to some stats and restructured the way I compute the variables in the script, but that shouldn’t concern you.
Some other minor tweaks and re-writes I can’t remember now, but most importantly…
ANIMATIONS! I’ve been experimenting with the idea and implemented quite a few animations during sex scenes. It’s a feature that has been really requested and I’ve decided to give it a try… They are just simple 2-frame animations, but it’s the best I can do considering my work-load and schedule. I want to hear your opinion on them… Do you like them? Do you feel they add something of value and are they worth the time and effort needed to create them?

v0.1
This final release of Chapter One has a completely reworked sprite system 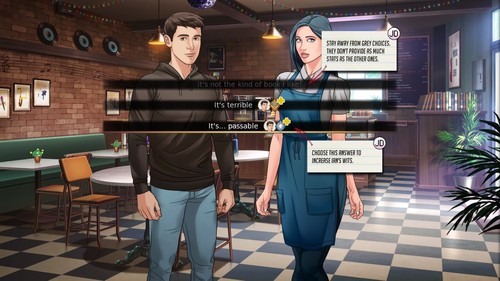 Gallery:​
At the bottom, a short description of the scene with the name of characters involved. As long as a scene is locked, the description is replaced by a hint on how to unlock it.
Use the character selection on the left to filter the scenes.
Click on the version number in the top right hand corner to check if you’re using the latest version. 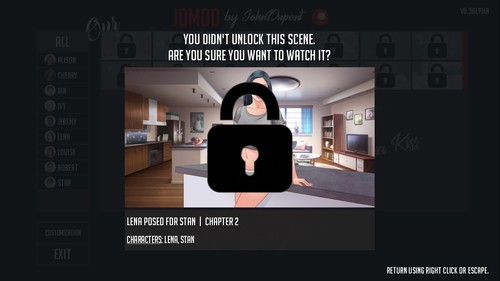 Keybinds:​
Use the keyboard to navigate the game:
– For choices, the number keys are used ;
– A timer was added to most screens (skill level up, new chapter…) so they will only linger for a few seconds. If you’re in a hurry, press Return to simulate a right click. 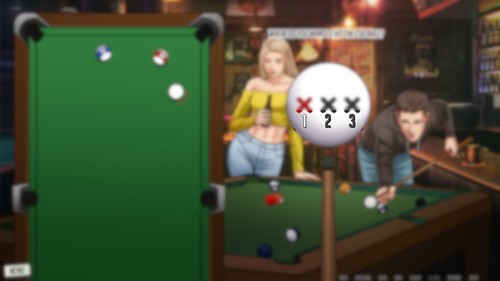 Rename:​
You can rename the characters. 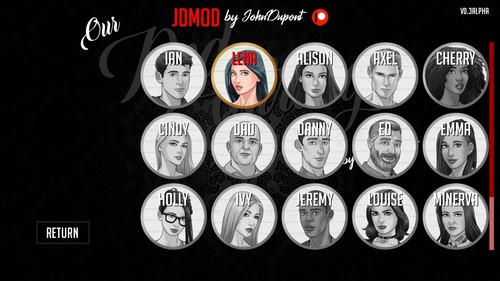 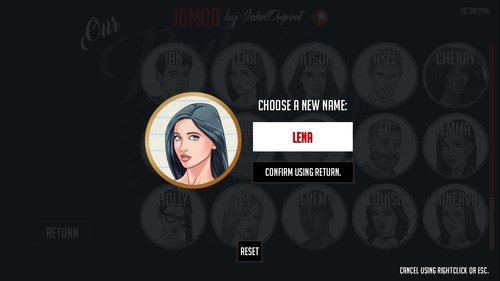 Installation:
To install a JDMOD, follow these two simple steps:
Step 1 : Extract the .7z file.
Step 2 : Drop the extracted folder, named “JDMOD”, in the folder named “game”. The latter is in the same folder as the .exe you use to launch the game. For MAC, you can find it in “Game .app\Contents\Resources\autorun” .
You can uninstall a JDMOD by deleting the folder named “JDMOD”. I recommend doing it before installing a new version.