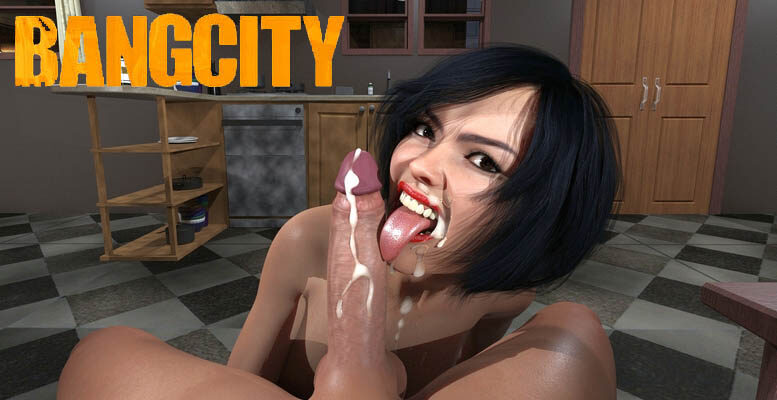 BangCity is a rundown place ruled by gangsters and corrupt politicians! The hero of this game is Babyface! Grown up among criminals he decided to go his own way after the gang was busted. Now he has to build up a new life and starting his revenge against all who did hurt him!

MC has to gain control over the gangster’s wives and needs to get closer to his Landlady, Valerie!​

New sideplot: choose Valerie’s favorite team and watch the soccer matches with her. Slightly varying gameplay and bedroom activities during the matches.
Always after winning the game Valerie wants to be spoiled. This event increases every time and offers new possibilities and variations and takes into account made settings and the respective progress in the game! The event starts at the earliest after returning from the beach.

Shopping with Valerie:
This is part of a new plot series where MC and Valerie will do more things together.
The event starts at the earliest after Val and MC visited Zoeys Club the fist time, and advanced Players will see the event accourding to the used savefile.
It starts with a boutique in the shopping mall. Valerie tries on clothes in the boutique and shows them to MC.
Of course, MC wouldn’t be himself if he didn’t take the opportunity to be kinky!
In addition, our heroes meet an acquaintance who encourages them to play more games!

Technical changes:
Due to the increased size of the game, I have converted the images to webp to reduce download problems.
Fixed some minor bugs which were not essential but could create inconsistencies in the flow of the game when playing it with attention.
Some spelling mistakes corrected.
Added sounds to some older scenes.

– Enhanced some existing repeating scenes with more options and images:

Many news scenes in the gangs living room!

v0.12a Fix1
Alright, i checked this, i fixed this. And i testet it from start to end of the game!
Because this is a start proble, restart the game please!

v0.12a
600+ new images
– Breakfast with Diane
– Renovation of the gang living room.
– Dwayne’s new club has opened!
– Optional (NTR) scenes: A visit at Dwayne’s
– Zoeys Club: Enough scenes for all preferences. Plenty for NTR opponents to see, too!
MC and Valerie can meet nice people there and admire artistic skills in pole dancing !

v0.11c
– About 300+ new pictures.
– Sit on the couch at evening to smoking weed with Valerie with more options.
– Another training with the gang ladies
– Sometimes Valerie waits in MC’s bed after work at noon.
– Valerie wants to go to the movies with MC!
– Another scene in chapter 1: MC takes care that the bitches can go shopping without being reported to the police.

v0.10a
– Having fun with Diane
– First time sex with Valerie

v0.09b
– A new photo shot with Valerie
– More fun in the basement. You can smoke more often now, but Valerie might get angry if you smoke to often.
– More pussy eating
– MC strokes the G-Spot

v0.09a
– MC starts to eat Valeries pussy
– Sideplot – The photo studio
– Punishment system – Spank the bitches to raise there motivation and income!
– MC is forced to go to the bank and withdraw money if cash is low
– New city map (not perfect but better)

v0.07
Another week in Babyface’s life:
– Babyface meets someone again and fucks up.
– Valerie decides to tutor Babyface
– Babyface finds out where Charles is hiding.
– Photoshooting with Valerie
Fakeday feature:
Relive a few select moments from the game so far.

v.0.06
New content:
Content 2 Weeks more in game.
A lot of scenes in the gang hideaway. Babyface is fucking all of them!
More help from Valerie.
Display of Valerie’s mood and intimacy level (to be improved later)
More scenes with Valerie in her bedroom, basement, shower and living room
Photo shootings with Valerie.

v0.05
Week 5
Babyface is still hurt and needs Valeries helping hand while Tiny Charles is still in the gang-hideaway.
At the end of the week, Babyface can make him leaving the house.

v0.04
Week 4
Babyface got hurt by Tiny Charles, a returning gang member and has to wear plasters.
He can’t visit the gang hideaway anymore and needs help from Valerie.
Linda is unhappy because of Charles return and asks Babyface for help. He has to deal now with the new situation.