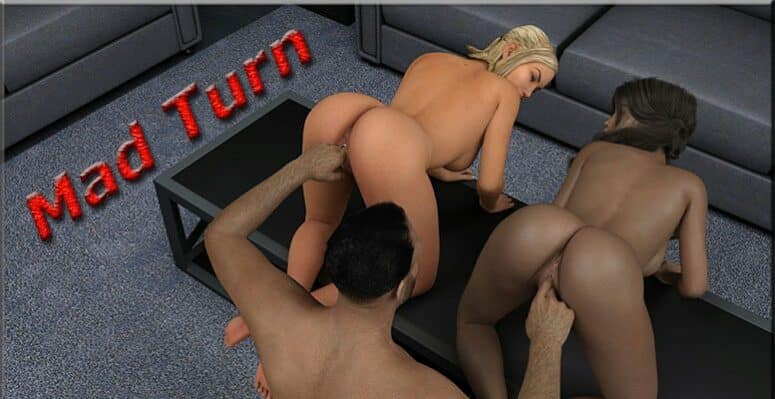 It’s the first part of the big story of the usual office employee Matt Terner. His life goes by a standard scenario. Wife, work, home and gym. But nothing lasts forever. With all of us happen unexpected and not always pleasant events. And our hero is no exception. At one point, this event changed all his life. For an ordinary guy, without a craving for adventure, it is a truly Mad Turn.​..

+ Changelogs
v0.71
1. Update 0.71 is a continuation of the scene in the night club, as well as its completion.
2. This update contains 200 new images and 8 animations.
3. File with the walkthrough of a scene in the night club is attached to the post with a link to the game.
4. The design of the dialog box has been changed.

v0.7
1. Update 0.7 includes about 390 pictures and 5 new animations.
2. Update 0.7 is a continuation of the story of Matt and Anna.
3. A couple of scenes is added to the events in the nightclub and after the nightclub.
4. Update 0.7 has 4 new sex scenes and a couple of softcore scenes.
5. If the game freees after the launch, you need to click «Restart» button in the upper right corner
and then start playing from main menu.

v0.5:
1. In the version is 0.5, I changed the sequence of the chapters. Now the first chapter of the game will be the one where Anna is sitting in the bar and waiting for a partner.
And this chapter was called “Prologue”. The very first update of the game, which tells who Matt is divided into two parts: before the corporate party and after. And they were called “Update 0.1” and “Mad Turn Update 0.2”
2. A scene from the crime place, which was not in previous updates, was added to the” Prologue”. Anna and Aaron get there after Anna answered the call from police officer.
3. Now, even if you didn’t hit Christopher when you caught him with Patty at home, Matt will do it himself.
Matt will be sitting on the couch drunk and remembering how he broke into Christopher’s office and punched him. You can see how it happened.
4.Mad Turn Update 0.5 contains about 245 new images. Added 23 animations. Animations are present in almost all sex scenes by one except for two small scenes.