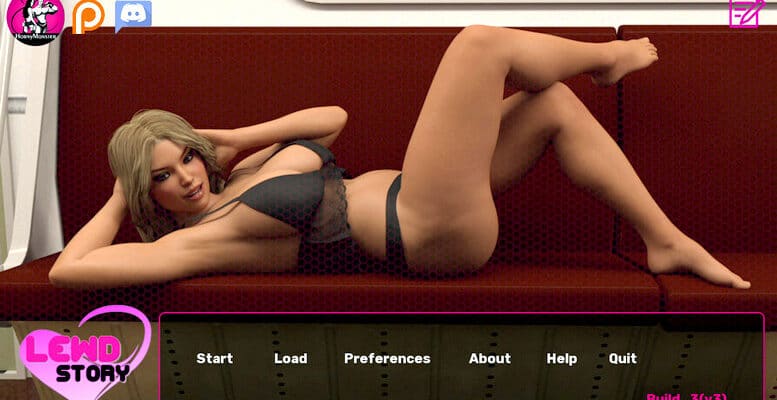 After mysterious incident in your hometown, you move to a nearby city to study at a university. You will have to live with your si… I wanted to say with your childhood friend. You are bound by a common secret, and you don’t know how it will affect your relationship with her. You also have a lot of opportunities to build relationships with the girls around you. You’ve got a fateful week ahead of you, the result is in your hands, and with the right decisions between your legs.​..

v0.13
Two main changes:
Renders. 99% of renders from build 1 and 2 were upgraded to FullHD (1920*1080). This is 511 images, or more. The game still runs at 1024*720 resolution, but now when you open it full screen (F4), all images will remain in good quality.
Animation. There are currently 100 animations in the game. And more then 90 of them was 6-8 frames per second, and sometimes even less. Which doesn’t make the not best animation look twitchy and worse than it can be. Additionally some scenes were shot by an extremely drunk cameraman who has a camera living his life. Now all animation 30-48 frames per second. Also, some of the animations were designed to fix camera movement.

LS 0.12
130 new renders and 6 new animations.
Bonus scene with MV. 40 renders and 3 animations. The hero’s clothes in the previous bonus scene were changed (around 20 renders).
Added a mall. You can visit it after class.
Finally got the sex shop running (Part of Mall).
A part-time job is available.
Minor changes and bug fixes.
Little tip. To start the Jeanine route, make sure you call her on Tuesday.

v0.1
The game structure has been changed.
The game has added a replay menu wth characters and Ethos filters as part of the Extra menu. While only the beta version, in the future functionality will be expanded. You can run both from the main menu and during the game.
The hero’s name can be changed in Extra menu, it only affects replays, but it is not for sure.
Added 50 new renders.
64 old renders have been updated to FHD resolution.
Fixes many small old bugs, but also added a lot of new ones, especially concerning errors in text and plot. Please let me know if you find anything.

Lewd Story Build 4 v2
I finally solved the problem of launching the animations. No more blinking at launch. Playing absolutely all of the animations is unified.
Fixed and replaced two animations in the final scene with Mike.

Lewd Story Build 4 v1
Added dominant route for Jessy.
Added around 425 new renders.
Added 34 new animations.
Added 3 new endings
The ending with pregnant Kira is open to everyone (and that plus a couple more animations and renderings).
New bonus scene with Miss Valentine. (40 renders and three animations)
After receiving Ethos, the type of points received by the character will change. So far, only Jessy has it.
About 40 old renders have been updated to FHD quality.
And a lot of other minor changes.

Lewd Story Build 3 v3
Added an Android version, and made the appropriate changes to the code.
Fixed a lot of small bugs and mistakes in the text.
Some cosmetic changes

Build 3 v2
Fixed a problem where part of the translation was not updated to a new one.
Fixed the problem that new content was available with any ETHOS.
Added some sounds to new scenes.
The old text layout is back. Now all text is white. The function of “choosing the styles of text” had to be disabled, its functionality was unpredictable.
Fixed some renderings and animations, updated information messages/images. “
Fixed many small bugs and mistakes.

Build 3
Lewd Story Content:
The romantic route of the Kira. 75% complete.
Tutorial. Thanks to him, I hope you now have a better understanding of how it all works. It’ s also expanding the story a little bit.
Around 430 new renders. This 229 single renders and 205 unick animation frames (17 animations).
From now all singles renders in FHD (1920*1080)

Added/Fixed in Lewd Story:
New textbox design. Now it’s smaller, so it’ll be less blocking the images.
Added hints to the Ethos choices. So now I think you won’t have any problems with that.
Added a menu with character points and current Ethos status. It should also make the game easier to play.
(Added text style switch. Two options are now available: white text for all characters or individual colored text with a white outline.) – temporarily off
Added changelog in game. I also will publish some hints for new content there.
Adde list with available naughty content in game. You can see it when start the game. In future I just make separate menu for it.
Completely changed the translation in the game. Most likely, there are a lot of mistakes because of this. I will be looking for them carefully for the next month.
The old bonus scenes shifted a day earlier.
It’s a little bit of an adjustment to the Lewd Story.