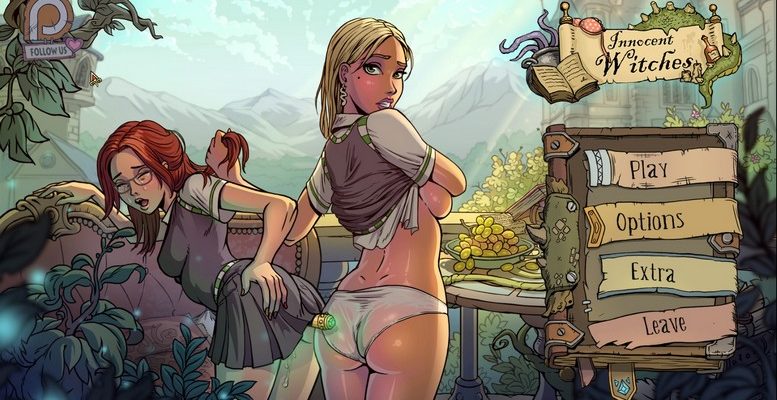 Amazing and at the same time, a strange story was told to me by an old acquaintance by correspondence. He told me of the time when he was nothing but a simple guy, yearning for a young female flesh. But due to the thunderstorm of events, in which he was cast, he found himself at a disastrous end. His birth was shrouded in mystery, and his goals were that of a simple man. His youth could be the envy of all. But to live through his destiny and bear the entirety of it, is even beyond my power.
He will recite you a tale about the students who changed his life. And many women who he met, and how they have changed his fate.
We are about to take an endeavor into a magical world, that has not seen a wild debauchery since the fall of the Bewitching Guild.
The old magical school, that above all valued purity and chastity. And we also hear about a young doctor, who grew tired of old witches, and who dreamed of young and innocent witches. Many familiar characters will meet us there; some of them will take on roles you would have never expected to see them in. Child’s tale transform into the one for an adult. You have never seen them like this. What was hidden or held back from the inquisitive, but naive child’s mind, will be revealed with most obscene details…

+ Changelogs
0.5.1F
1. Fixed most of the critical bugs that were reported to us by the players
2. Probably added a couple of bugs as a result

0.5F
1. Dark path in chapter 5 is now passable!
2. Continuation of Luna’s scene
3. Additional scenes for dark path added
4. Miniskirts quest line, you can get 2 shorter skirts on the main girls now (more later)
5. This will allow you to buy new things from an old friend
6. Dressing room added
7. Peeking on the girls in the shower introduced (minimum functionality)
8. Quest to introduce drinking game added
9. Drinking game itself added (preliminary, basic functionality) to make money
10. Sexecution catalogue and market introduced
11. Dark path special scenes with Susan for tutoring
12. Dark path scene with Hermione
13. Manipulation/Fervor mini-game added
14. Continuation of Diadem quest line added
15. Combining and breaking apart of items mechanic
16. Special scene with Daphne introduced
17. Easter egg with portraits is in game
18. Portraits now have random texts
19. Haggling with Filch mechanic added
20. Chapter 4 was slightly overhauled (updated with goals + fixed bugs + more streamlined now)
21. Added an option to change the speed of scenes/events (can be accessed via the “Advanced” tab in preferences)
22. Ability to save screenshots into the in-game gallery (can be accessed by hiding the interface via the button in the dialogue window, or by pressing “H”)
23. Bunch of different QoL fixes and additions for interface and translations

0.5B
1.Act 2 begins! (there are several additions in act 1 chapter 5 as well)
2.New scene with main girl (these scenes are on light path for now)
3.Dark path can now allow you to suspend Hermione and Daphne as well
4.Drinking scene bonus for Hermione and Daphne added
5.Art added for Hermione and Susan interactions with Markus tutoring
6.Added Christmas decorations for Marcus’ office! (better late than never)
7.Updated idles for Nola and Ginny
8.Ginny’s scene was updated
9.Changing room added (WIP, only Daphne is partially added at the moment)
10.New commissar scenes with all girls
11.New random interactions with portraits (WIP, may be broken in pre-release)
12.Dark path continues up to our next minigame which is still WIP (sorry)
13.Memories were added for all girls
14.Changes to Daphne Bathwater event
15.Many quality of life improvements and additions
16.Fixed a multitude of bugs
17.Added new bugs

0.5A:
1.Added new manipulation abilities (both dark and light).
2.Added plot, ability to wear diadem.
3.Added lock mechanism (requirement for sex scenes).
4.Added new scene with a main girl!
5.Many requirements for said scene.
6.Redesigned the screen that pops up when error happens to be more user-friendly.
7.Added a way to get more memory fragments for Sonya (can be accessed via her menu).
8.Added early stages of tutoring, light path is fleshed out partially, for 1 girl.
9.Dark path is not complete yet.
10.Added memories, you can replay scenes (around 80% of them at the moment). Some of them have additional bonus content.
11.Added poses for manipulation scenes for future releases.
12.Increased the amount of galleons which Marcus can get (advance the plot to unlock this).
13.Fixed bugs.
14.Added bugs.
15.Started working on the next scene with one of the main girls!

v0.4F:
1. Continuation of the main story.
Quest with a diadem.
Continued with Elena.
Quest with violation of REMEMBER.
The tendency of girls to violate REMEMBER.
Now you can slowly solder the girls.
2. Light and Dark path for passing the game, the choice affects the game.
Get a permanent position at Hogwarts.
Follow the bright path, find the girls diaries.
Follow the dark path, trick the girls into violating REMEMBER.
3. New location, bedroom in the office.
4.New costumes available for girls in the store (so far only 2, more in the future).
5.New costumes for Sony.
6. Updated the magazine, added tracking tasks for the fifth chapter.
7.Shorter skirts are now available in the game (skip)
8. Added mechanics of locking the game, while not in use, backlog for scenes in the future.
9. The fifth chapter can be completed with one girl or with all four at the same time.
10. Merlin moved to the right side of the corridor, it became easier to notice him.
11. Added tasks with all the girls, for the light and dark path.
12. The location of the flywheel of time is now random, transparency depends on the level of attentiveness.
13. Quest for additional options in the store.
14. Scenes in classrooms.
15. We increase our authority in the eyes of girls, medical examinations are just around the corner.
16. Added all the emotions in the fifth chapter.
17.Now you can follow the calls of the characters on the calendar.
18. A bunch of bug fixes.
19. Added a wagon and a mountain of bugs.
20.And some other changes!

Everything is ready for the introduction of the first sex scene with one of the main girls in the next update.

v0.4B:
1.X-ray and Influence have level 2 now:
This means panties can be made transparent
Influence will bypass stat checks to level 10 now
2.The way dialogue is displayed has been completely overhauled internally
3.Other internal changes to the code and clean up
4.Many, many, many bugfixes

v0.4.A:
1) Added support for Android: this is our first release for android, please let us know how it works for you!
2) Added new location, second corridor, this will allow us further into the castle in the future.
3) Extended Susan’s minigame and rewards
4) Updated Hermione in Chapter 4, completely overhauled most of the text for brevity, gave the player more control for skipping text with her
5) Updated the Ginny scene, it’s now repeatable AND you can get her naked
6) Added new position for Markus in text, corruption is coming, soon!
7) Additional scene with Minerva added, and a new outfit
8) Updated all Marcus minions for consistency and better art
9) Added many bug fixes
10) Created more bugs

0.3.1f:
1.Fixed display bug on layered images (this is what took the longest)
2.Made Ginny scene repeatable through summons
3.Enabled Influence for all things requiring stats
4.Updated tooltip for Influence, it will even hint when you use it for Ginny
5.Fixed other bugs, related to critical tracebacks
6.Time turner now works even when levels are capped
7.Ginny diary guesses now work in russian
8.Fixed many other bugs
9.Probably added a few more elsewhere.

0.3f:
Added new Ginny Quest line, with additional minigame, sexual scene (More will be added to the scene in 0.4a)
Converted the entire game internals to english as the native language, this will allow additional languages supported going forward and speed up development
Added peeking on all main girls.
Added additional main story progress on commissar positions with all 4 girls
Added a new mini-location (zoomed in office table), to allow new interactions with the girls
Redid every translation because we flipped the internal text.
Added many dependencies on stats
Adjusted stats to make the grind less-so (we hope)
Added additional easter-eggs with Ginny (you’ll have to look for them)
Added emotions in many places where they are missing (still have much more to go)
Fixed Ginny to not be broken if you lose the key, you can get to it in chapter 5
Updated the abilities buttons layout and issues with beta buttons
As noted above, Diary for Ginny is now decryptable, you will have to play her mini-game first
Added logic to corral player to the right path in chapter 5
Added additional riddle questions for Nola
Added chapter 5 objectives (YAY!)
Made it so you can buy pills from Snape, removing the hard limit set
Added hinting for most menus (it tells you what the level requirement on the stat is)
Fixed many many bugs
Probably added just as many new ones!

0.3b
1.Relationship bars for all main girls (WIP, they will not provide additional content or checks atm)
2.Added Paths and abilities, you get 1 investment point, per level increase of each stat (check your journal to use)
3.Updated stats for Marcus, they were negatively being impacted(unintended effect).
4.Updated the effect of the time turner to negatively impact relationships with the girls
5.Implemented the X-Ray ability, you can now see through the girls tops, use before summoning (only works on the main 4 girls atm, it will have multiple levels of use in the future)
6.Introduction of Chapter 5, you will now enter the corruption phase and relationships here.
7.Nola door blocker has multiple ways to unlock access to the castle through stats (intellect is the easiest way out level 2)
8.Created open world experience where the player can navigate through out the castle and go to different parts, depending on time of day
9.Introduction to grading papers to make money (Chapter 5)
10.Ability to shop markets via the brochure, certain items increase relationship, others are negative (Chapter 5)
11.Summon girls for swimsuit of your choice (Chapter 5, waifu is easiest, can be used with X-Ray)
12.Updated the Important notes, it was a day off for people skipping text
13.Corrected grammar, and translations further
14.Made Hermione’s minigame easier with the ability to give up
15.Updated Ginny path to be accessible from Chapter 5 as well, if not done in Chapter 4
16.Fixed waifu selection blocking Ginny
17.Added a lot of Sonya hinting for Daphne minigame
18.Fixed other bugs
19.Added bugs