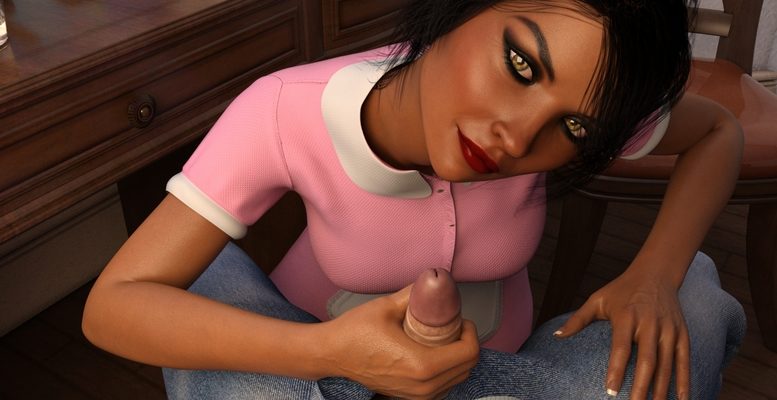 This series features a non-linear narrative in which the MC is a patient, discussing his sexual encounters and romances with his therapist. As the patient tells the story to his therapist, you the reader will make choices that change the outcome of the story. Your decisions in the story will alter the nature of each of your relationships and determine what shape and form your sexual experiences take…

v1.1.5
Bug fixes to v1.0.7b
Added “End of Content” notification
Amanda Chapter 02 (Consists of seven new scenes with different paths)
Typographical error corrections
Created a “jukebox” to manage music tracks and volume levels in the game (look for a patch in the coming weeks that implements this jukebox thus fixing the crackling, static played during certain tracks.
Redesigned the initial set up sequences (This should fix the “menu_shuffle” exception some players were experiencing)
Implemented a menu shuffling toggle (Previously if you had the menu shuffling option turned on, all menus were shuffled, even those during character creation. This allows more control over which menus shuffle and which ones don’t)

As you may recall, at the time of v1.0.7a’s release, we had an issue with old saves not working. Try as I might, I could not resolve this issue. (I delved fathoms deep into Renpy’s structure to know that the issue lies in the callback stack and structure of the .rpyc files, but was no closer to implementing a solution that didn’t introduce other bugs).

Realizing that I could no longer promise saves functioning, I decided to put in place some game enhancements that had been in development but were being saved for a future update when the broken save problem was overcome.

And of course, the remainder of the team was lost, leaving myself as the sole water carrier for the whole project. Time was needed to bring up to speed with Renpy’s coding and perhaps most importantly, Daz. I acquired the skills necessary and pushed on!

To that end, I’d like to note that when you reach the new material (starting with the conversation with a certain computer nerd) all of the material in that scene and after is 100% Roman Hume. Every aspect of those scenes from the writing, coding, and rendering were all done by me and me alone. I look forward to your feedback regarding that part of the game. But I digress.

There have been some considerable improvements to the game over all, and without additional preamble, I’ll get into that now!

-The Planner: Included in this version of the game and going forward, players now have an in game database at their disposal. This journal includes additional game options (including the beginnings of a “cheat mode”, as well as Biographies and social standings with the ever expanding cast of characters in the game.

-Social Standing: Players of Previous editions know that your relationships with your lovers always balanced between two attributes, a red and a blue. This has been expanded and now every named character or cast member has these attributes. This means every social interaction you have will bear some influence on how characters respond to you in future scenes. You can check your standing at any time in the Planner mentioned above.

-Name your MC: This has long been requested and is now finally implemented. But while going through and updating all of the code to let you name the MC, I decided to go a step further. The groundwork has been laid in all of the existing material and soon, in a future update, you’ll have the ability to rename ALL of the Characters! Certain game assets (like chapter title cards) will always bear the original character name, but in the dialogue and story itself, character names will be replaced with first and last names of your choosing. So for now, enjoy naming Roger, whatever you want. And look forward to renaming your lovers, and well pretty much everyone else in the future.

-Music and SFX: This is something I’ve long wanted to do but had some serious problems finding good sources of royalty free sounds. That was finally overcome and now the game includes 46 Music Tracks and 24 Sound Effects to date. From scene one to the end of the current version, there is no music and sound throughout that really adds to the feeling of the story. As part of this endeavor, I also took great pains to manually equalize the music across scenes in the Renpy code. So in theory, you only have to set your volume once and it should be good for the rest of the game. If you run into any problems though, as always, let me know and we’ll see what I need to do to fix it.

-Turn off Menu Color Coding: This is something that was half implemented previously but can now be turned on and off in the planner. If you’re the type that wants to make your dialogue choices based on the responses themselves and not what paths they relate to, you can now add that element of randomness by turning off the Red/Blue color coding of the dialogue menus.

-Randomized Decisions: I finally learned how to randomize menu choices in Renpy. So the Red/Blue/Black responses are randomly listed each time you come to a choice. Combined with the ability to turn off the color coding altogether, players now have the ability to play through a truly random experience. Unfortunately this currently applies to all menus. I’m working on a method of selectively turning it on and off, but didn’t want to delay this update while I worked on it. Look for the feature to be further improved in the future.

-Directory and File Restructuring: Why should you care? Because this reorganization means that future updates can now be doled out piecemeal. For future updates, Patrons will now have the option of downloading the entire game, or just the individual chapters. This means as updates become available, you can quickly download the latest content and bug fixes and just merge them into your existing files. Knowing that I plan a few rewrites and expansions to existing scenes in the future, these files have already been restructure and rebuilt to accommodate those updates.

-Stat Notifications: As you make your choices and character’s red/blue stats are impacted, you will now get a notification in the upper left part of the screen. If you choose to, you can turn this feature off in the planner.

-Pregnancy Notification: You will now be notified when a character is pregnant. There is also an indicator for each character in the planner. This too can be turned off if you want to be surprised.

-Pet Names: Want to give your lover a cute nickname? Want them to call you something adoring? Open the planner and visit the Pet Names section and you can change how other characters refer to the MC and how the MC refers to them. This isn’t just for lovers! This is for every character. If you want to call Arthur “Fuck Face”, then go into the planner, go to pet names, and under “I Call Him” put “Fuck Face” and viola, at certain points in the dialogue where appropriate, you’ll have a chance to say it to his face! (Pet names are purely cosmetic however and do not impact the direction or flow of the story).

-Scene Jumper: Since I can’t promise saves work, this is the next best thing. Go into the planner, go to Interface, and turn on Cheat Mode. This will open up all the character bios currently in the game, as well as create a fourth tab that will allow you to select a character and jump to any chapter for that character. Understand of course that this feature is best used to jump ahead and see new content. Randomly jumping from scene to scene and trying to “play the game” that way will probably cause something to break.

-Character Menu: The menu in which you select which character’s story you experience next has been redesigned. The new menu has better flow and also indicates which mood a character is in when entering their next scene. Available characters are highlighted and when all characters have been darkened, you’ve reached the end of the current content.

What got left out?

-Mc Skin Tone: I was working on a way to change the MC’s skin tone. About part way through my dick asset broke and I suddenly wasn’t able to change the flesh tone of the beans and franks. Rather than delay and sort it out, I pushed this back on the burner and I’ll continue working on this for some future update. I still very much want to do this, but I gotta work out this third party software first.

-Journal: Another plan is to include in the Planner a record of your decisions and the synopsis of the character story thus far. The ground work has been laid and you may find some remnants of my tests still in the game. However, full implementation of this feature will require me to go back and write many, many lines of text in the exiting scenes. It’s not hard, but it’ll take a little time and I didn’t want to delay for that. So look for that to be fully ready to go in another couple of updates.

As promised, new content includes the remainder of the Nanami chapter we started in v1.0.7a. It’s only four new scenes, but it’s over 12,000 words of dialogue and 285 new renders, all done by me!

And What’s Next?
Well, the next is already written and much of it is coded. It just needs art. Precious, sexy, wonderful art.
I have Amanda’s next Chapter written and partially coded (It’s a big one with about ten scenes in it, and yes, it includes sex!)
Cassie’s next scene is more than three quarters written (Also a large one with seven scenes so far, and yes, sex!)
And finally Emily’s next scene is about halfway written.

I have a first draft for a lot more than this, so when I say “written” I’m referring to the second draft that is tightened up and ready for coding and implementation. In all likelihood I’ll work on Amanda’s art next because she’s not gotten much screen time yet and her story is just waiting on additional code. While doing that I’ll finish working up Emily and Cassie’s stories and probably start in on the final draft of Jane’s next chapter.

There is a lot to do. But now that the major game enhancements are done and served, I can focus my time on pure content development. A major shift, and certainly a welcome one.
Anyway, I’ve dumped enough words in your face for one night.
As always, thank you for your support! Thank you for playing! And thank you for your patience!
It’s been a long road learning what I needed to get here, but we’ve arrived! Let’s see what happens next.
Cheers mates! And as always, I Salute You!

v1.0.5:
-Changes from Several minor bug fixes and spelling corrections. A new menu was included that allows players to monitor their relationship status with different women in the game. We also added a new menu that allows specific kinks to be turned on and off.
-Added Content: Two new scenes for Cassie, one for the Blue path, one for the Red. Also included a new scene to introduce the housekeeper Lupita.

v1.0.4:
This update contains two new scenes and will amount to about fifteen to twenty minutes of added gameplay. Which scene you experience will depend upon your choices during the pool scene with Cassie, Amanda, and Jane.