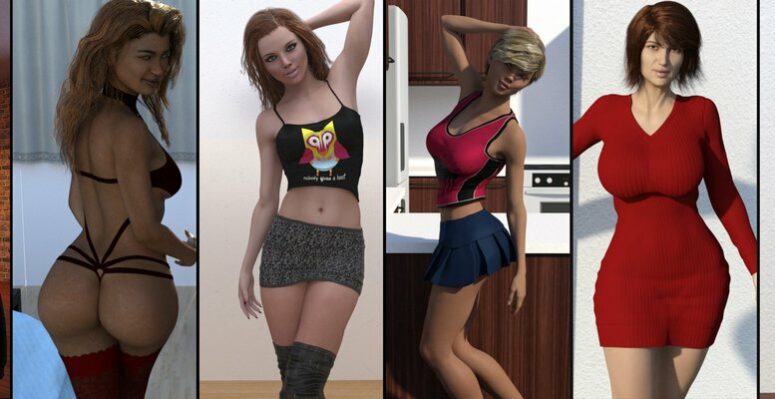 You are returning to your childhood home to visit your mother’s best friend Monica and Monica’s two daughter’s whom you grew up. You haven’t seen them in several years (for reasons explained in the game). In addition to these three ladies, there will be plenty of other characters in play (friends, foes, neighbors, stalkers and the “Coffee-Shop Girl”). Now go ring the doorbell. Monica and the rest of the ladies are waiting…

Ep.19 Official Release
There has been some minor changes (stats scores, some dialog change and a new scene at the very end with some plot update).

Ep17
You can now name your saves to make it easier to keep track of your different playthru’s.
If you don’;t want the save name prompt, you can turn this off in the “Preferences” section.

Where The Heart Is Gallery:
We’ve added a gallery section wher you can click on a particular lady and join the action in whatever scene you want (with max stats for the lady). This will allow you to sample any scenes that you might have missed out on due to choices or attribute check fails.

Where The Heart Is Change MC Name:
You can change the MC’s name at any point in the game.

Dialog / Text box preferences:
This has been here awhile but we never formally announced it. In “preferences”, you can change the following:

If you turn off text background completely (works best for me too), there might be some parts of the game where it’s easier to read if you turn on a background temporarily.

Where The Heart Is Episode 16
This great story continues.

Ep. 11
Made some changes to my initial plans for this episode. Increased the focus on the three primary characters (as I felt after 11 episodes,things were starting to lose pace a bit).
Focus on the three primaries obviously impacts the air time for the supporting cast, but expect that to balance in the next episode. (Although Angel & Zarah do make appearances)
Bella / Jolina / Lily / Debbie do not appear, but they WILL be in episode 12 (where Elaine also makes her entrance)