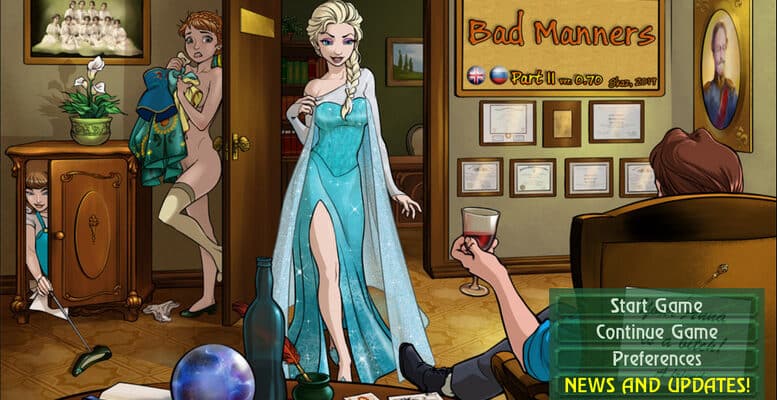 After the unsuccessful attempt to usurp the throne, the disgraced Prince Hans Westergaard gets a sudden offer to become the principle of the Imperial College of Proper Ladies. The mysterious benefactor who made the offer promises its powerful patronage, and maybe even the throne, if Hans can change the proper ladies into… ordinary sluts. First hesitant, Hans zealously accepts the offer when he learns that the sister-princesses who ruined his plans will also be attending the College! But everything isn’t as simple as it seems…

v.1.10
+1 additional ending
New recruitment of peasant girls in the College. Will they be able to fit in?
Elsa asks Dorothy to take care of Anna. Hmm, the Queen doesn’t seem to understand the consequences.
A way from a farm to her own castle? Dorothy receives an offer no one can refuse. Or can she?
Merida’s brothers find out that their sister is in the College, where the girls are very liberated. This opens up very interesting prospects for the lads… 😉
It seems that Martha is plotting another betrayal. However, in sex, she is good as always…
Cassandra is ready to prove with her sword that she is not an attachment to bed! It seems that the girl needs ‘training’, but it will not be easy at all, you know.

v.0.98 Full
What’s new:
+2 endings!
Anna calls her sister a prostitute and demonstrates her love for Hans to her subjects
A witness appears who saw Hans f.cking Elsa… OMG!
And there is another witness (he/she discovered consecuences of the stable fight). Holy shit!
Rapunzel returns. Hans has to choose one of the three girls
Hans has sex with two girls at once! Lucky son of bitch!
Lars only has sex with one, but… Using his remedy he can make his dirty fantasies come true…

v.0.92
Fully completed Chapter XI, with all additions and updates!
+2 new endings
Anna competes with peasant women in sex 🙂
We’ll see the consequences of Anna’s training by Martha… (It’s not the first time a girl got into trouble because of her naughty little tongue 😉 )
Elsa won’t let anyone think her breasts are too small!
Elsa resorts to extreme measures to to teach her little Anna some respect (well, every teacher has their own methods, but… handcuffs?!)

v.0.91
+2 new endings
Hans can try to convince Elsa to be more merciful to Dorothy. And it’s better for Hans to do it when he is alone with the Queen, yeah…
The Master of the Lodge offers to marry Hans a person of Royal blood. Is Hans’s dream of a crown really coming true?
Hans will have to whether to protect the girl-commoners or the interests of his class. Hmm, doesn’t the second option make more sophisticated women available to Hans?

In the Chapter, Hans has to confront not only his brother, but the mysterious Lodge. To win, he needs to enlist the support of College students and Queen Elsa. But will Hans be able to bring the girls back to his side, because almost all of them are delighted with the new President?

BM Part II ver.0.90 contains chapters 7-11 (with all current fixes and extensions)
Attention! All previous BM saves are not compatible with ver.0.90!
To play, please, start a new game and start with a Chapter you haven’t played yet.

v0.86 Beta
3 extra endings!
Anna learns why Hans may prefer her to her sister as well as the truth about how Queen should serve her king…dom
Elsa discovers how to be in Hans’ bed with whores and yet remain Queen
Anna decides to be an adventurer, becomes happy and makes happy other people (men mostly) 🙂

v0.82 Full
Disclaimer has been changed
A picture from the version see above…
What’s new in the version (changes 0.81>0.82):
FULL Chapter 9 with all routes, branches and 5 endings
We fighting with Belle’s quirks and triyng to make her loyal assistant
To awaken Belle’s sexuality, you need to unravel the mystery in her past

Bad Manners v0.82 beta 2
No Martha’s emotions in the Belle’s scenes – fixed
Wrong characters flipping (Ch.7) – fixed
Inaccurate translation of some dialogues with Belle – fixed
Crash in case AudioDriver was not installed – fixed
Many typos in the text (Ch.9 and earlier) – fixed
Changes:
Disclaimer has been changed
A picture from the version see above…

Bad Manners v0.81
3 new endings
Anna comes to the fun room
Martha is ready to spend the night with the Baron but she makes a condition… What if you accept it?
Martha trains the commoners… What if she will become train princesses too?
Elsa, Anna and… Hans’ thingy

Beta2
Fixes:
One of new ending (“Bestiality”) was not accesible under some conditions – fixed
Wrong appearance of one of a Lodge characters – fixed
Inaccurate translation of some dialogues with Martha – fixed
Some typos in the text – fixed
Changes:
We’ve found a better name for the ending – changed

12000 words
3 endings
Search a whore for Baron
Hans announces which girl he likes best
Dorothy starts to do THAT under a blanket
Fun Room is opening! My God, it’s not just some peasant women here…
A girl in Hans’ bed. Elsa doesn’t mind. How is that possible?!
Anna, Hans and vodka. Hmm, I’m afraid even to imagine the development of the plot… 😉
Martha-trained girls and a new party. Yeah, the party is very different from the previous ones
and many other things…

Bad Manners Part II v0.77:
Scenes of punishment at the stables (Yes, guys, bad girls need to be punished, right?)
Scenes where the groom pays attention to both of his girlfriends
Beatrice is taught to write poems about sex, and Martha takes the rod in her hands
Of course, there are new pictures of punishment and sex

Bad Manners Part II v0.76:
8-th chapter has three additional endings now!
Couple of new scenes
Anna offers to lick and she succeeds (but not quite as intended 😉 )
Elsa tryes to impress Hans and gets a new outfit for role playing
Playing cards with Dorothy has now become more convenient
The sisters decide who marries Hans

Bad Manners Part II v0.75:
New Chapter (8th), 18000 words
New locations: Forest and Room for pleasures 🙂
Elsa’s first time 😉 (yeah, I know you really waiting for that)
Anna, dressed like a peasant woman visits a man at night
Dorothy plays strip blackjack. Unfortunately (for her), she hasn’t got much luck 😉
College students get more and more indece… ahem.. difficult homeworks!
Alice tries to be a virtuous wife. But it’s not easy, you know. 😉
and many other things…
So, you ready for that?
OK, Release dates for you:
Ver. 0.75 (beta) for 10$ and up = Early April
Ver. 0.75 for 2$+ and up= End of April
Ver. 0.75 public release = End of May

Bad Manners Part II v0.70.03:
* The game is divided into two parts. Part I contains chapters in the 6th, inclusive, part II contains chapters, starting with the 7th.
* The distribution is bilingual, the language can be selected in the main menu.
* Added new chapter (9th)
* The chapter contains 5 endings (you can come to one of the endings in two ways, through different chains of events) with art for each ending
* New events have been added to chapters 5, 6, 7 (Jasmine, Rapunzel and the stable line have been expanded)
* Chapter 7 received two additional endings with art for each. In total, the 7th chapter now has 3 endings
* Added new locations: thick
* Added minor characters: Madeleine
* Several events were merged, the text was edited to increase the dynamism of the narration
* Added new pictures when peeping at peasant women
* The appearance of some locations changes (new details appear on them)
* New items to shop
* There are several new painted erotic scenes in development:
– With Elsa (several),
– With Martha,
– With Dorothy,
– With Alice,
– With Emerald,
– With Madeleine,
– With Belle,
– With Jasmine,
– With Rapunzel,
– With peasant women.
* Simple animation included in many chapter scenes. 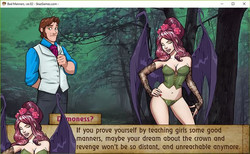