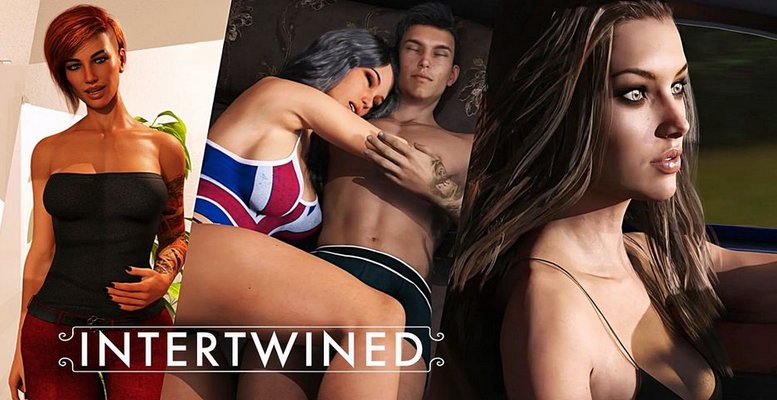 The story centers around you, a 18-year-old man who returns to his hometown after living with his dad for the past 5 years. Discover what you left behind. Rekindle old friendships, start new relationships. Find out how all of them are “Intertwined”!​

v0.10.1
– Added a missing image
– Fixed some clipping issues in 2 animations
– Corrected spelling errors
– Fixed some small bugs
– Fixed Layla telling you to ask Valeria out even though you’re on Layla’s path.
– Fixed Elena’s brothers not recognising you after you’ve visited their home.

v0.7
– 1000+ new renders
– 1.5-2 hours of playtime (Heavily depends on reading speed, chosen routes and you won’t be able to see every scene with 1 playthrough.)
– Spelling corrections in previous updates and I’ve added commas where needed.
– Changed everything to British English since it was mixed with American English before.
– Save game compatible with 0.6
– Changed the main menu and added a Discord button.

v0.6
– 1100+ new renders (+animations)
– 2 hours of play time (Heavily depends on reading speed, chosen routes)
– Save game compatible with 5.5a
– Drama heavy (be prepared! And to answer your question: “of course”)
– You can delete saves now

v0.5.5a
For the people who found a few bugs in their playthrough:
Here’s an update 0.5.5a. I also did some spelling corrections.
If you didn’t have an error, you’ll be fine for the upcoming episode since the changes impacted earlier scenes and route endings.

v0.5.5
This is not a continuation. It has the same ending as 0.5!
It includes new scenes though.
Your old saves do not work.
You need to do a clean install. Best to remove the old version beforehand.
– 526 new renders (+animations) in Intertwined
– 250+ redone renders from episode 1 and 2
– No more .. –> changed to regular … or ? etc
– Changed/added a few dialogue lines/choices
– Code changes/Point system changes
– You can name your savefiles now.

v0.3a
I took out the whiny parts and changed the options forgive her/two can play this game to: Move on (Not really interested in her, but can change once you get to know her again)/Confront her (Still have feelings, but you need to sort things out first..)