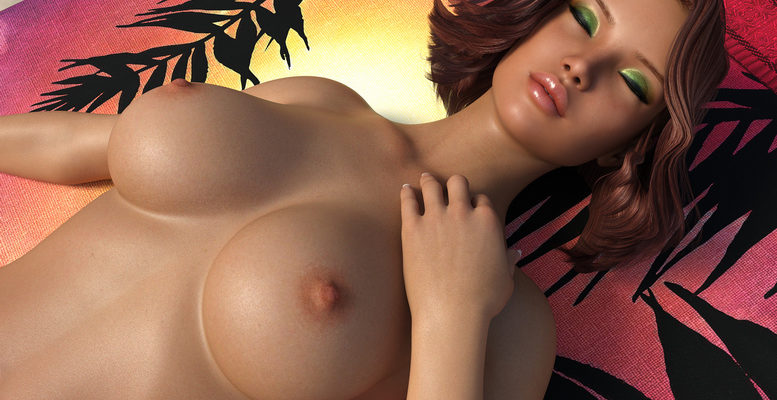 The story is about a young guy who just finished college. He celebrates this at a party. Then he wakes up in the middle of nowhere. He cannot remember what happened. He has a complete blackout! Did he drink to much? How did he end up so far away from home…

+ Changelogs
Edited screenshot to show the navigation menu at the bottom in both modes.
replaced map with navigation menu that switches between the local ‘area’ and ‘island’ locations
➤character icons show the location of the main characters
➤a padlock indicates a closed location (opening hours)
➤complex locations (possibly the hotel in the future) will replace the local ‘area’ buttons automatically based on the players location
added a battery to the UI to show the players energy level, since this is no longer hidden some irrelevant MC talk about the his energy got removed when trying to sleep
merged into a single UI-screen: hotkeys, vignette, navigation menu, quick menu, orgasm bar, quest tracker, other UI-texts and -buttons, mousetooltip
added black outline to clickables for better contrast and visibility on small screens
reduced the quick menu to buttons for ‘Cheats’, Auto-forward-mode ‘Auto’, Skip-mode ‘Skip’, removed and disabled the Ren’Py standard skip indicator
the hotkey ‘2’ now teleports to the players bedroom instead of opening the map

General:
the version scheme changes, V10 becomes 0.10.0
it is no longer planned to release this game in episodes, therefore “Episode” gets removed from the title
savegame path changed from “HolidayIslands-Episode1-1510310011” to “HolidayIslands”
added a savelock, by default it is no longer possible to ignore a warning about an incompatible savegame

Game Mechanics:
drug effects no longer reset at midnight, instead they have a duration that ticks down when the time advances
money related functions got simplified and NPCs no longer ‘virtually carry’ money around, they only keep a debt value
character-objects got split into the MC (main character) and NPCs (non player characters) with different properties
added rudimentary inventory, owned items are visible in the inventory-tab in the quest journal
made the password guessing for the quest ‘Access denied’ easier
every location now only uses one screen instead of two
NPCs will no longer follow fixed activity schedule except for sleep and work, they can now do random things based on many factors like time of the day, previous activity, events, etc
NPCs can talk independent from their location, in case a dialogue is designed for a specific location NPCs can give hints to the player to solve quests easier (still needs a lot of work)

Content (all work in progress):
Lisa: added quest “Magic Hands” to learn how to give a massage (part 1/3 done)
Tracy: added background story, you will find out why she’s on the Holiday Islands now
more random activities for Meagan and Emily
adding pool to the girls house