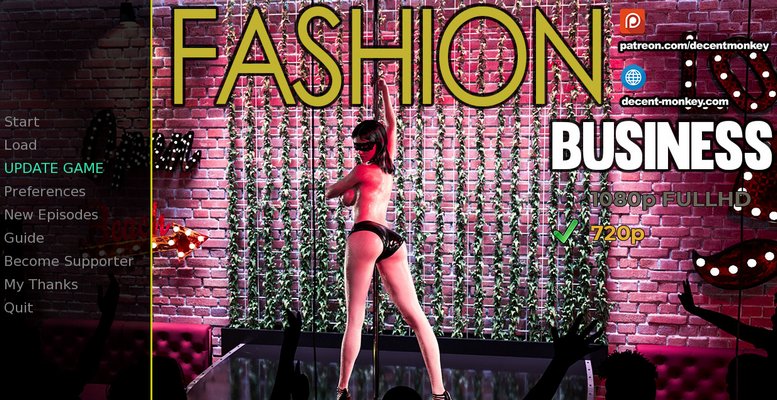 The second episode of the great game, about the bitch Monica. Enjoy…

+ Changelog
Fashion Business: EP2 v12 has been released!
Hello!
Welcome to the new update for the famous Fashion Business!
In these trying times, a lot of people delay their projects, but I’m doing my best to stay on pace so I could keep the game’s fans happy!
During the development of this update my work station’s video card died, I had problems with my router, the power went out a number of times, I had to reinstall the OS, my render station hanged up and so on…
Still, I did my best to resolve all of those problems as quickly as possible, so it didn’t affect my work in any significant manner. 😉
I try to stay one of the most stable developers and I hope I can continue doing that in the future!
Anyway, what’s new this time:
Melanie: She’s trying to uncover Victoria’s secrets. Will she be able do it?
VIP Escort: New scene. Family drama 😉
Philip: Extremely hot and highly-animated threesome scene. (extended version with ass-to-mouth animations available in the extra version)
Office: New ways to entertain Daddy 🙂
Shiny Hole: Beginning of private dancing for the pub’s patrons.
Julia: Last part of the “panties color” quest. What will come of it in the future?
House: Bardie’s new tricks. Seducing Ralph.
Revenge Quest: Continuation of the story.
Fixed and improved:
A bug that caused crashing during the scene with Melanie.
Achievement update bug.
Problems with story quests if you spend the night in the slum apartment.
The problem of breaking quests when the right mouse button is pressed during the dialogue. A lot of mystical bugs are related to this.
The ability to reset Shiny Hole quests after loading v12 (you need to enter the pub)
The ability to send a crash log with one press of a button.
The translation engine was changed. Lower memory consumption. Faster game starting.
Show the game menu by long tap on Android devices.
Enjoy the game!
Yours DecentMonkey.

Episode 2 v11
A new regular update for the all beloved Fashion Business game is here!

A lot of new possibilities and hot scenes await you!

What’s new:
Public event. Monica is living in the high society. Many of her old and new acquaintances will meet her there. Monica will have to do her best to conceal her current situation.
New hot photoshoot.
Escort jobs. Two big scenes. A lot of H-content.
A new scene with Phillip
Shiny Hole. the first private dance.
Slums apartment. New place to live in. Bonus scene (Extra version)
A new chapter in the romantic relationship with Julia.
Revenge quest continues.
Achievements list is now a gallery (beta). Some scenes are still unavailable.
The Cheat menu is now available in all versions. (click on the painting in the former Monica’s room)
Fixes and improvements:
You can now skip to a designated day of the week.
Fixed a bug with inactive bartenders in the Shiny Hole.
Fixed the bug regarding the quest restart in the Shiny Hole.
Performance improved
Other minor bug fixes
Enjoy the Game!

Episode 2 v10
What’s new:
Another long-awaited update for your favorite game!
This release contains 1000 of new images, 57 new hot animations, and around 2000 new dialogue lines.
I’ve worked hard on this upcoming update, which includes the beginning of the long-awaited escort storyline. Monica will finally have a new money-making opportunity 🙂
As always, high-resolution graphics will await you along with incredibly realistic animations!
What’s new:
Escort missions: Monica will gain a new money-making opportunity (Philip’s and the hotel employee’s offers), and then she’ll get hired as an escort.
Continuation of Bardie’s storyline: a new scene with Eric, Bardie, and Betty.
Continuation of the office storyline with Biff: a new scene in Biff’s office and an opportunity to develop the relationship with Biff (castings). The public presentation.
Relationship with Julia: a rather spicy relationship develops between Julia and Monica, maybe a start of something romantic 🙂
Shiny Hole: New developments in the relationship with strippers, intrigues and scandals. New hot dance with one of the strippers.
Fixes:
– Numerous bugfixes.
Changes:
Arrows that lead to the photoshoot pictures/dances you’ve already seenchange their look.
A number of new animations will be exclusive to the extra version of the game, along with Molly’s dirty trick, concerning Monica’s panties.

Episode 2 v0.9
Hello!
I’m happy to announce that a new version of the game liked by many has been released!
This is the best update it’s ever had! Check it out for yourself ASAP!
What’s new:
Continuation of Monica’s and Bardie’s story. You’ll get to know what Monica has to do to solve Eric’s college problems.
You’ll also get a chance to play as Melanie: move around the city and visit your apartment. There’s also a new big event with Monica, Melanie and Victoria. And more amazing scenes, including an exclusive photoshoot, featuring Melanie.
Continuation of Julia’s quest. Monica will have to do her best to complete Fred’s request. Many new events with Julia, Monica and office workers.
Monica can now earn more money, dancing in the pub. New events in Shiny Hole! You’ll get to meet strippers Molly and Claire. New locations, a whirlpool of events, rewarding new dancing mechanic! 30 animated clips and 8 music tracks!
The beginning of Revenge Quest.
A cheat menu for the extra version (check the painting in Monica’s former bedroom), the addition of even more animated scenes, and an exclusive topless body oil scene in Shiny Hole.
Bug fixes and overall performance improvement.
The latest release contains more than 1250 new images, 73 new hot animations, and about 2000 new lines of dialogue.

Episode 2 v0.8
The release contains more than 1700 new images, 42 new hot animations, and about 2000 new dialogs. I put a lot of effort into creating close-up animations for this update. Now their quality has become even higher, and the animations looking as realistic as possible!

What’s new:
Continuation of the storyline with Bardie: new Bardie’s orders, new locations, new characters (Bardie’s friend and their teacher), new hot scenes with Bardie and Monica, with Monica and Betty, as well as with the teacher.
Now there is an opportunity to play for Betty when completing the quest with a visit to сollege.
Continuation of the storyline with Marcus and new scenes in prison, which many have long been waiting for.
Relations with Julia: a new task from Fred and four new piquant mini-events with Julia.
BugFixes:
Fixed a bug where Biff doesn’t hire Monica to work in the office (no need to replay the game, it’ll be fixed automatically)
Other minor fixes.

Slums: new pole actions. 3 variants for each citizen.
New office quest: reports collecting.
Relationship with Julia: 5 mini-events.
A new way to earn 50$: go to the slums with your secretary (extra version).
New HOT photoshoot.
Main story: continuation of Melanie’s storyline.
Beginning of the relationship between Melanie and Victoria.
Beginning of the Marcus storyline.
Shiny Hole: Monica starts a waitress career.
Shiny Hole: punishment scenes. 4 scenes with Joe and 3 with Ashley. To start these scenes, Monica needs to leave the pub without giving tips to the owners.
Change: added a way to sell the dress without losing dignity.
New achievements system: You can see all the events available in the game. In one of the next updates, it will become a Gallery.
New game updating system. You can do it online. Works for PC and Mac (Experimental).

Serious bug during the work as a seller in the clothing shop: in some cases, the final customer didn’t appear.
Other minor fixes.

Episode 2 v0.6
Meet the new fresh regular update for the “Fashion Business” game!
This update consists of 1950 new images, 20 animation clips, and about 2000 new dialogues.
As always, I try to achieve the maximum quality of gfx, animations, and plot.

Whats’s new:
– New actions with Bardie.
– With the help of Bardie Monica will eat in the kitchen 😉
– New falling path event: naked boobs. A lot of variations for different citizens: 27 in total.
– Betty’s visit to Steve’s office during “signing” Steve’s contract by Monica.
– First contract with Jane.
– New work in the office. Monica will become a Boss again.
– Two new hot photoshoots.
– Melanie is back.
– Ability to eat in the Shiny Hole pub.
– Ability to eat in the Restaurant located in the Le Grand hotel.
– Added a scroll bar to the quest log.

Episode 2 v0.5
This update consists of 1200 new arts and 62 new animation clips and is very hot!
It focused on scenes with Monica and starts just after the last Steve’s visit.
In the update Monica wiill visit Steve’s office, but she needs a proper clothes.
If Monica was kind to people, she can take a discount and get the dress from the clothing store for a low price.
However, she may try to steal it…
After getting the dress Monica will go to Steve…
So, as always, Monica’s faith is in your hands.
Enjoy the game!

Episode 2 v0.3:
I’m proud to announce the release of Fashion Business Episode2 v0.3!
The new version contains 1130 new arts and 43 animated video clips.
As always, much attention is paid to the emotions of the characters.
Each H-scene is animated. Animations are of high quality and smooth (30 fps).
In this version, as in previous ones, a lot of efforts, inspiration, and soul.
I hope that you appreciate the game and leave your feedback!
Enjoy!

The short changelog:
Big “office storyline” update. Different outfits. Hot scenes, etc.
The advance of relationships of Betty, Fred, and Monica. Hot scenes too.
New location. The pub “Shiny Hole”. Some story and start working.
Added dancing at the pole in the blind alley.
Ability to buy food at the gas station.
Skipping day until evening by pressing the button on the top of the screen (working only in the street locations)
Change clothing before leaving the house by the map.

Chengelog Episode 2 v0.2:
This is one of the most significant updates ever. It consists of about 1400 new renders and several animation clips!
The new version contains great progress in several lines of the plot.
Bardie storyline
Bardie wanted to find an approach to Monica to see her panties, and he could succeed, even more than
Betty storyline
Betty, perhaps, will trust Monica more and offer to visit the fitness.
Monica can’t do training yet, but she can watch on girls how they do it.
Several replayable scenes with several variations are awaiting you there.
Besides, you may discover about the weaknesses of strict Betty. But it depends on your choice.
Dick and Victoria storyline
Monica will advance in the relationship with Victoria. They will become ‘friends’
Office storyline
If Monica suddenly needs money, she can continue to earn it from Biff
She understands what these photo shoots can lead to in the end, so is she ready for this?
Falling path
Delivering flyers is not the easiest way to make money. Maybe Monica will find a way easier? But is she ready for this? Perhaps it’s okay to make a small exception, it’s not for long, right?
Also, you can learn some news about the secretary of Monica