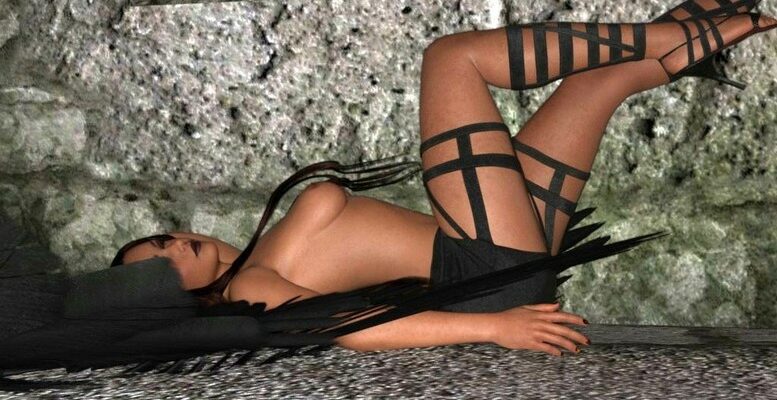 In Damsels and Dragons you play a man who is managing a group of female adventurers – 4 at first, but more as time goes on – forming parties, sending them on adventures, getting them magic items, etc. Over time you will gain the affection of your adventurers, learn to cast spells, and engage in acts of lust and perversion…

—HELP—
X is character slot number (0–whatever); Y is desired amount.
The names of traits & fetishes can be found in-game using the help menu.

+ Changelog
Damsels 1.18 (Final) Release
This has been an incredible project for me. I began over two years ago, attempting to design this game in PyGame, only to be unable to get it to compile in a way I could share with others. Then I ported the whole thing over to Ren’py. The first version had four characters and two places to adventure, and some very minimal sex options, but it expanded significantly from there.

This version finally does something I’ve been wanting to do for a while, which is have topless and naked versions of the girls for kneeling and kissing. There is no change in gameplay in this version, just a bunch of renders. As has been the tendency lately in my renders, there’s a lot more variation in poses involved there, as well. The original kissing renders were among the first renders in the game, so it’s good to replace them — I’ve improved my technique a lot over the last 2 years.

If I get bug reports or anything of that sort, I’ll continue to support Damsels and release small updates, but it’s been a while since there was a bug report that didn’t involve someone playing an outdated version, so … fingers crossed. 🙂 This is intended to be the final version of Damsels.

I hope you all will stay for the development of Leather and Steel, but if not, it’s been a lovely ride, and thank you very much for your support for Damsels and Dungeons.

v1.14
New Content:
A significant amount of text has been added to various sexual actions. Many actions will give you different text in different circumstances, and the system is set up for more variation in the future.
Added a scene with Shamira involving the Masocishm fetish.

UI Improvements:
Many text buttons have been replaced with something graphically more attractive, with tool tips. The old tutorial text has, in most cases, been replaced by the tool tips, which will be available throughout the game.
You now click a button to send the girls on a mission, rather than them automatically going when the mission is full.
When a girl is speaking, her name will be listed as the speaker.
In addition to Gold, Mana, and remaining Attention, the information that appears when interacting with girls for sexy times now includes how many girls have yet to be checked for whether they want sexy times or not, allowing you to make more informed decisions about how to spend your attention.

Bug Fixes:
If you exit the mission screen after assigning some girls to a mission, but not enough, the game now removes them from the mission, rather than leaving them on with the date to complete the mission not set.

Functionality Changes:
Blowjobs and Handjobs use less attention, as does Kissing. Many actions, however, can be segued into from other actions — kissing can lead to making out, which can lead to a blow job, with cumulative attention costs.
Because most of the “lesser” actions can be gotten to by starting with kissing, the “take it easier” menu no longer exists.
Sex now gives a greater amount of affection. It was nerfed in an earlier version, and this puts it at somewhere between the original amount and the nerfed version.
Many sex actions give slightly different rewards or give those rewards under slightly different conditions, or they cost different attention in different circumstances.
There is now a chance of pregnancy for Amazons, Paladins, and Barbarians having foursomes.
It is no longer possible to get a duplicate character in the Hills by defeating the Reaver Camp, nor is it possible to get a character of the class of one of the 4 existing scripted characters.
The degree by which monsters get more difficult over time has been reduced, with lower caps on how much stronger they can get.
Monster experience and gold now scales up with the monsters getting harder.

v1.13
This one is short, because 1.13 is mostly new content and each entry covers a fair amount of stuff. Bugs were mostly handled in 1.12.1.
New Content:
Hilda is now a scripted character, with several unique events related to her, including one which involves an interaction with Amora. If you recruited a valkyrie in 1.12 or later, it should already be named Hilda and will have all the scripted options available.
Khoraja, the sorceress, is now a scripted character, with a few unique events related to her, one of which involves an interaction with Felicity. You can recruit her at the Domina Chateau.
Rogues recruited in 1.13 will be a scripted character, “Shamira.” There are no scenes for her yet, but that will be coming in a future release
To have access to these characters, you must not have a character of their class in your roster.